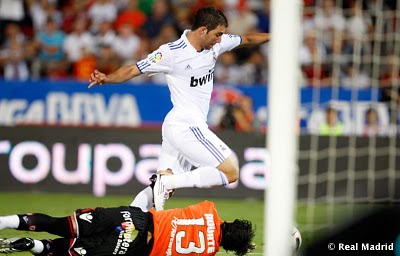 Madrid fans may be stereotypically fickle and quick to get out the pañuelos, but we at Managing Madrid don’t think that there’s any cause for alarm.  Although Mourinho’s first match was underwhelming, disappointing fans that expected to see a crack Madrid squad put the struggling Barralets to the sword, the result is understandable given the circumstances and hardly represents a serious blow to Madrid’s title challenge.
Due to the late start date of the Spanish league, this match will have little impact on Madrid’s rhythm for the rest of the season, as the players will now join their national teams before returning to action in two weeks.   Additionally, because of the way that La Liga does tiebreakers, using head-to-head results rather than goal difference, as well as the gulf in class and consistency between the top two and the rest of the league, the two Clásicos will likely decide the winner.  Real Madrid can likely afford to drop two points occasionally as long as it does not become a habit.
While I, along with many pundits, believed that Mallorca’s disastrous financial situation, the loss of several key players in the off-season and their woeful pre-season form meant we would see Real Madrid roll over them on the way to three points, Michael Laudrup and his men proved us wrong.  The Danish legend excelled at giant killing during his time at Getafe and his team was compact and resilient today, relentlessly pressuring us on the ball.  Mallorca were an excellent team last season, finishing fifth partly due to their extremely strong home form, losing at San Moix only to Real, Barça and Sevilla.
Their strength last year was predicated on their tough defense, which has remained mostly untouched by the summer sales.  That was on display today as Dudu Aouate, the Israeli keeper, made a number of crucial saves to keep his side in it, while Rúben and Nunes, the Mallorca central defensive pair, harried and jockeyed our forwards every step of the way.
As Mourinho said after the match, the problems are a result of one major factor, which is the extremely limited amount of time that he has been afforded to work with his players so far.  Because of the World Cup, injuries and new signings, many players are either unavailable or only very recently became available for selection.  We knew Madrid wouldn’t be playing at their best, and in order to win even under such circumstances a team must be tidy at the back so as not to concede and take advantage of the chances proffered.
Today, Real Madrid did the first and not the second, which was exceedingly unlucky; on another day, the team might have put five or six of the chances away.  Had the referee shown a frankly unarguable red card to Rúben for Denying an Obvious Goal Scoring Opportunity (DOGSO) and given a free kick at the top of the box, which is prime Cristiano Ronaldo territory, the game would have been over in the 25th minute and the media would be talking about Mourinho’s sensational debut.
The problems with Madrid’s performance were relatively easy to see.  Di María had a poor outing on the left, allowing the Mallorca defenders to heavily mark Ronaldo.  De Guzmán hemmed Marcelo into a defensive role, diminishing our offensive capacity on the left flank.  Mallorca’s high pressing caused us to give the ball away far too often and forced the likes of Canales to come deep to collect the ball.  Our passing was all too often limited to longer vertical passes from deep that often recycled possession too quickly.  Our tempo was slow, which failed to put pressure on Mallorca’s backline, but it also did not have the normal benefit of keeping possession more effectively.
But there were also some notable highlights: Mesut Özil looked electric, Canales, Xabi Alonso and even Sergio Ramos played some utterly sublime angled through balls, and Carvalho looked assured in the center of defense.  Casillas was strong both offensively and defensively, with his distribution efficiently recycling the ball for counterattacks.  Sergio Ramos had an excellent game marauding down the right and Khedira added dynamism and solidity to the midfield in the place of Lass, who offers little offensively.  There is little reason to panic and great reason to look forward to this young, exciting team coming together in the games to come.