Share All sharing options for: Tactics and Formation Analysis: Defense 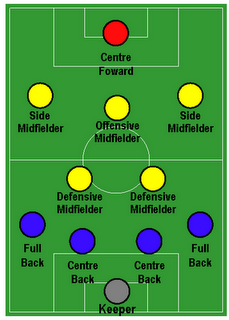 Even after the departures of Rafael Van der Vaart and Royston Drenthe toward the end of the transfer window, Real Madrid are faced with an embarrassment of riches in nearly every position. This suits master tactician José Mourinho, who is equipped with a veritable arsenal of options for lining up his team. This article will examine various formations and tactical permutations, focusing on the defense and defensive midfield, while a forthcoming article will address the attack.

Regardless of which formation Real Madrid play, a standard back four is almost certain to feature. All of Mourinho’s favoured formations – 4-1-2-1-2, 4-3-3, 4-2-3-1, 4-2-1-3, and so on – have four at the back, at least on paper, and while some event may force his hand into a three defender line-up, it seems unlikely enough that we can leave it aside for now.

While the Merengues have racked up a truly astonishing injury table in defense, with Pepe out temporarily and Garay and Albiol facing long periods on the sidelines, a fully fit roster would make for some selection headaches. As it stands, the first choice pairing is obviously Pepe, who is about to make his return from a minor injury that kept him out against Mallorca, and Carvalho, the €8m summer signing from Chelsea. Both players are very strong in the air, comfortable with the ball at their feet, and are certainly not shy about sliding into a bone-crunching tackle. Pepe also has a turn of speed and a powerful physique, which might complement Carvalho’s approach, which with age may become more measured and utilize his positional sense and timing on the tackle.

Garay is young and extremely promising, while Albiol is versatile and elegant, but barring injury or a major howler it would seem difficult for either player to force themselves back into the starting line-up after they return from injury. The safe bet is probably on Pepe and Carvalho being the first-choice center defenders for the season, again barring a sudden change of circumstance.

Flanking the Portuguese international teammates will be Sergio Ramos on the right, without question, and then one of Marcelo and Álvaro Arbeloa on the left. When Mourinho wants a more cautious approach, he will no doubt opt for the Spaniard, who is more tactically astute, more responsible at the back, and notably more defensive. Marcelo offers drive going forward, speed and raw physicality, which have earned him more than one comparison with his predecessor at the Bernabéu, Roberto Carlos. He still has a long way to go to live up to his illustrious compatriot’s achievements, but Marcelo is probably the best choice to start. Marcelo has certainly come a long way defensively in the last two years alone and Arbeloa’s natural right-footedness and unadventurous movement in the opposition half make the Brazilian a more likely candidate for the first team.

Moving up into midfield, there are a number of tantalizing possibilities for Mourinho to choose from, each of which offers different advantages. Of the formations Mourinho has been known to play, only 4-1-2-1-2 and certain variants of 4-3-3 use one holding midfielder. Most of the others (notably 4-2-3-1 and its cousin 4-2-1-3) use two. With a single holding midfielder, the choices are, in descending pecking order, Xabi Alonso, Sami Khedira, Lass, Gago, or Mahamadou Diarra. Of these, only the two Diarras, Lass and Mahamadou, are true midfield destroyers, and would likely be best suited to marauding in front of the back line alone. Lass offers much more going forward and has better distribution and more pace than Diarra, and so would be a better choice to anchor the defense in a single holding midfielder set-up. Gago and Khedira are too offensively minded and while Alonso has the defensive nous to pull it off, he would probably not be able to be very effective at contributing to the attack with his superb passing if he were the sole defensive midfielder, except against an ineffectual attack where another body in attack is necessary to break down a packed defense.

Given Xabi Alonso’s value to the team and the fact that he performs better with a partner, it seems likely that Madrid will line up in one of a variety of formations with two holding midfielders. Let’s look at these pairings and what they have to offer.

Lass and Xabi Alonso formed the first choice pair last season. Lass did the hard work in defense, buzzing around and picking the ball off and distributing it, while Xabi Alonso focused on playing killer through balls and long passes, contributing to the attack. At least, that’s how it was supposed to work. In practice, Xabi Alonso does not actually move forward into attack, but rather sits back and plays long vertical passes or sprays the ball to the flanks as well as mopping up defensively, and only comes out to the edge of the box when most of the team is around the penalty area. This rendered Lass slightly unnecessary defensively and left a hole in midfield, a gap between the defense and the attack. Madrid too many times last season looked like two teams, a block of six defending and a block of four attacking. This isolation was easily exploited by good teams and Mourinho will look to fix this.

Perhaps the best option is to play Xabi Alonso alongside Sami Khedira. Khedira has an incredible work-rate and a very high level of fitness, so like Lass he can do the hard work in midfield. He is adept at winning the ball and eager to push forward into defense, where Xabi Alonso will be able to cover for him in the event of a counter attack. Khedira is an outstanding passer and offers far better distribution than Lass, as well as an aerial threat.

If Mourinho is interested in playing more defensively, Khedira and Lass might make an interesting duo. Though they have many similar characteristics, Lass’s defensive nous would liberate Khedira to stride forward in attack. The midfield would be extremely resilient, good on the counter and supremely adept at winning back the ball without hopefully sacrificing too much creativity in midfield. The most likely scenario for seeing this pairing is if Xabi Alonso is injured or ineligible through suspension, although Mourinho might choose to utilize Gago’s creative characteristics to replace Xabi Alonso in a like-for-like swap rather than switching him for Lass.
Most likely the first-choice Madrid line-up in defense will look something like this:

Stay tuned for the next installment, which will address Real Madrid’s killer offense!