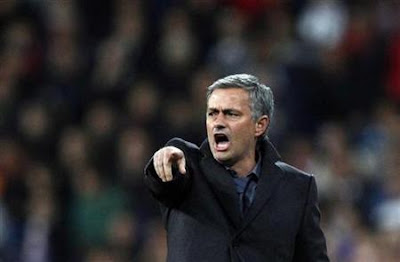 After the verbal sparring match that occurred this week between Sporting coach Manuel Preciado and our own Jose Mourinho, it was no surprise that the Portuguese and his men received a forceful reception inside the cauldron that is El Molinón.  The Asturians got stuck in, pressuring Madrid and conceding some nasty fouls, leading to a late red card for a bad two-footed tackle on Cristiano Ronaldo.  Madrid won 1-0 after Sporting keeper Juan Pablo could only parry an excellent header from the ever-improving Benzema into the path of the lurking Higuaín who made no mistake in tapping in from a yard out.
According to MARCA, Preciado and Mourinho ran into one another after the match in the parking lot.  Mourinho couldn't restrain his urge to taunt his opponent, so he showed him a 'V' sign for victory.  Of course, in England, this V sign also means the same as the middle finger, so it may have been somewhat more incendiary.  Preciado then got in the face of Rui Faria, a Madrid physio, who retorted that Sporting were going "a Segunda" - to the second division.  Preciado then grabbed his genitals and threw a bottle at the Real Madrid team bus as it left the stadium.  Goal.com further elaborates that this bottle missed the bus and struck a bystander.  One can only imagine the heavily inebriated Preciado screaming vulgar curses after his nemesis and drunkenly hurling a bottle only to knock a hapless spectator unconscious.