Share All sharing options for: Breaking News: Fabio Coentrao is IN MADRID...RIGHT NOW! 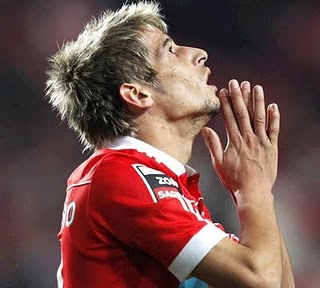 Fabio Coentrao, Portugal and Benfica's exciting young wing back (and long-time Mourinho favorite) is in Madrid right now trying to force some resolution to his signing. According to Marca.com, As.com, and other sources, Coentrao had been acting out recently during Benfica's summer workouts, and this unexpected departure for the Spanish capital suggests that something is in the works.

This is an exciting turn of events for Real Madrid, because in the past few days sources close to the negotiations suggested that Chelsea had jumped in on the negotiations, and had offered close to 30 million euros for the winger.

While the operation hasn't been finalized yet, all signs point to Coentrao signing for los blancos within the next few hours. No deal has been reached as of 17:00 EST (23:00 in Madrid), so the operation may be postponed until tomorrow.