Well, this really should be an update to my match preview below, but man, I really want to show off this ridiculous picture (RIGHT). Yeah, just soak that in for a second. Yup. So many questions pop to mind...but we'll get to those later. According to Marca--the authors of this amazing photoshop-job--Real Madrid will start Cristiano Ronaldo, Karim Benzema, Gonzalo Higuaín, and Mesut Özil tonight against Valencia.

Honestly, I'm not sure that this is news: we almost always start some combination of those players. In fact, the trio of Cristiano, Benzema and Higuaín have scored more goals than any team in Italy or France, and most teams in England (United and Chelsea, just to name two). These guys are really good, so it shouldn't shock anyone that they're going to start.

Perhaps the most interesting part of this news--if it's even true--is that Karim Benzema and Gonzalo Higuaín will start together. It has been a while since they played next to each other, and I'd be interested to see if they have any chemistry issues; plus, I can only image that Mourinho will choose a 4-3-3 with a Ronaldo-Benzema-Higuaín offensive trident and a Khedira-Alonso-Özil midfield trio. But hey, what do I know?

But let's get serious here for a second. Look at that picture again. Who do you think is Mr. Fantastic? The Thing? The Human Torch? Invisible Woman? I mean come on, people! I need some ANSWERS!

Cristiano Ronaldo: Human Torch. Fast, mobile, handsome, and kinda douchey. Feels like a match to me.

Mesut Özil: Mr. Fantastic. The leader, sets everything up, puts his plans into motion. Pretty much a no-brainer, right?

Gonzalo Higuaín: The Invisible Woman. He pops in and out of the area (and of games) without being noticed, slinking through and scoring with a velvety touch. OK, this one is probably the biggest stretch. But you see my point, right?

Karim Benzema: The Thing. Physical player, bashes down the defense, holds people off due to his imposing physique and style of play. Another reach, but maybe not as bad as Higuaín as Jessica Alba?

What do you think? 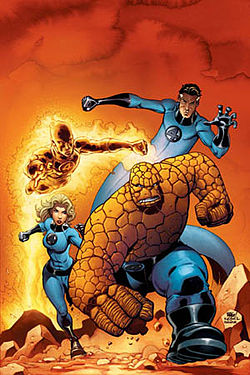