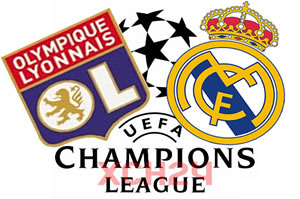 Real Madrid is set to take on Olympique Lyonnais in the group stage of the UEFA Champions League today, and Managing Madrid has you covered! Consider this your thread to discuss all things Real Madrid, UEFA Champions League, and if you must, l'OL; los blancos are travelling to a complicated stadium--they've been unable to win in their last four trips to the Stade Gerland, with their only positive result coming last season in a 1-1 tie--and they need our support!

This match, while it seems relatively unimportant, is actually one of the more pivotal games Madrid has played so far: if they win, they'll be officially classified for the next round, almost certainly as the leader of the group. This will allow them to take their match against Ajax off; this is important because three days after they visit Ajax, Real Madrid host FC Barcelona in the first of this year's clásicos. Now, that's an important match.

Interesting choices here from Mourinho: starting Lass at RB instead of moving Ramos over and slotting in Raúl Albiol. We'll see how it plays out, but it could be indicative of a long-lasting shift for Ramos to the CB position (which I think we can all get behind).

This does leave Madrid a bit weak at the RB position, though, as they're looking at a starting lineup that includes mid-level performer (and genuine good guy) Álvaro Arbeloa. I'm not saying that Arbeloa is a bad player; rather, he's a very, very good backup RB, but maybe not quite at the level of a Real Madrid starter.

What do you think?