El Clásico Tactical Preview: For Real Madrid, Without Mesut Özil, 4-3-3 Is The Choice

Share All sharing options for: El Clásico Tactical Preview: For Real Madrid, Without Mesut Özil, 4-3-3 Is The Choice

José Mourinho confirmed yesterday that Real Madrid's attackers will be Di María, Cristiano Ronaldo and either Karim Benzema or Gonzalo Higuaín. That means that the Portuguese coach will not start Mesut Özil, so the German's place in the starting XI will surely be taken by a midfielder.

Mourinho wants the team to press FC Barcelona's players like they did during last season's rally of Clásicos. That would mean that either Lassana Diarra or Fabio Coentrao will take on Pepe's role in the midfield line.

If Nuri Sahin was fit enough, he would be the ideal player to be in that 4-3-3 midfield, but the Turk hasn't proved that he is ready for a game of this caliber.

Arbeloa does certainly look ready to start--although Mourinho said that he subbed him against Ajax because the Spanish defender was feeling some problems in his leg--so Lass would be free to be in the midfield alongisde Xabi Alonso and Sami Khedira.

Coentrao performed pretty well in the midfield during the August Supercup games against Barcelona, so the Portuguese leftback might be the other option for Jose Mourinho to press Barcelona's midfield. Di María's role will be essential. When Real is forced to play defense, the Argentinian winger can, essentially, transform himself into another midfielder. Then, when los blancos recover the ball, he has the speed to go on the counter attack. 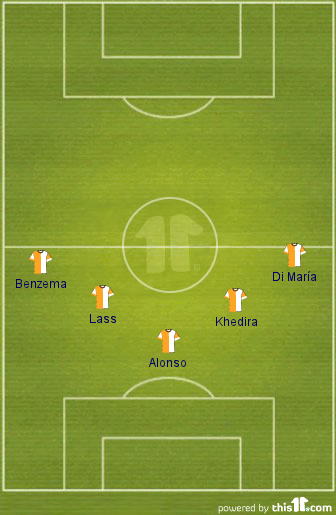 That would mean Real Madrid is defending with a 4-5-1 scheme. When the team recovers the ball, Khedira will probably go to the counterattack with Di María and the striker, joining Cristiano. If Real can achieve that, they would be attacking with the usual 4-2-3-1 scheme.

In the image (right) you can see what Real Madrid would look like defending with that scheme.

This requires a pretty intesive effort from everyone of Madrid's players. Di Maria, Lass/Coentrao and Benzema will probably get tired by the second half. That would be the right moment to allow Mesut Özil and Higuaín to come on. With more space, the German player can be decissive, while Pipita's speed could give Real Madrid good scoring opportunities.

Sergio Ramos and Pepe need to show that they are the quickest centerbacks in the world, and their coverage of Messi and Fábregas needs to be very close. Fábregas' ability to get on the rival's box is frightening, but if Khedira and the other midfielder are focused, Real Madrid's defensive line should only be worried about Messi and Alexis (if he plays).

This is probably the most important tactical game of the year. Mourinho and his players need to show that they are up to the challenge. Real Madrid needs to turn Barcelona's possession game into something superfluous. If the defensive line and the midfielders are focused, Barcelona will just have the ball without knowing what to do to get into Madrid's box.

The most important player of the game will probably be Di María. With the Argentinian pressing Barcelona's players, and if he has some chances of going to the counter, Barça's defense should have a hard time stopping Madrid's quickest players.