Share All sharing options for: Raphael Verane Signs With Madrid 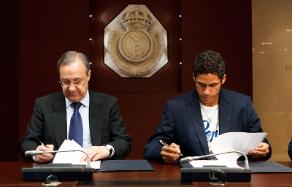 Raphael Verane, the super-young, super-talented, and super-sought after French center back signed with Real Madrid today after passing a medical examination. He's been described as a young Fernando Hierro, a player who Madrid will look to for stability on the back line for years to come.

He's certainly a great talent, and one of Europe's top defensive prospects...but (and there's always a but), considering how bad los blancos have been with signing CB's since Hierro left (anyone know how Garay is doing, by the way?), Verane seems like he could be just another name on the ever-expanding list of players that have failed to make a positive impact on Madrid's back 4.

At the same time, he really is very talented, and he's really, really tall, which should help our set-play defense, which has always been an issue. Here's how the Madrid site described the young Frenchman:

Raphael Varane (25-04-1993, Lille) is a defender with a promising future and an already brilliant present. Despite having just turned 18 years old, the player earned the admiration of all European football in his first year in the elite. His impressive height (191 cm) allows him to dominate the aerial game; his versatility makes him a solid defender or central midfielder; his elegance made him see only two bookings in the entire season; and his speed, sense of anticipation, dribbling skills and maturity turned him into one of the most important players at Lens, getting to wear the captain's armband in the match before last against Arles-Avignon.

At the moment, he'll have to compete for time with Ricardo Carvalho, Pepe, Raúl Albiol and Garay, though his youth and projection make him a very promising buy--a very probably member of Real Madrid's Defense Of The Future. Oh, and the fact that he can (and has) played defensive center midfield will certainly help his cause as he tries to crack the starting 11.