As I began my just-sat-down-at-the-computer ritual of checking sports sites, Facebook, and Twitter this morning, I was excited to hear what people were saying about the super important friendly Real Madrid will play later today against the LA Galaxy.

Well, I was quickly disappointed. Not only was no one talking about this game (I feel like MM was the first to ever mention it...and I mean that**), apparently Real Madrid had decided to jump in on the terrible mess going on over at Arsenal (sorry to everyone over at The Short Fuse), and lodge a €34 Million bid for striker Robin van Persie.

More after the jump.

**I don't actually mean that. It's going to be on ESPN2/DEPORTES, so there must be some sort of publicity going on.

According to CaughtOffside.com, Real Madrid has decided to kick poor Arsene Wenger in the...*ah-hem* chest.. while he's down. The dude is getting slammed on all fronts: in England, random tabloids gave insisted for months that young prodigy Samir Nasri will leave for...somewhere; in Cataluña, not only are the tabloids raking him over the coals personally, they're also portraying him as an evil, terrible fascistic overlord (no, but seriously): 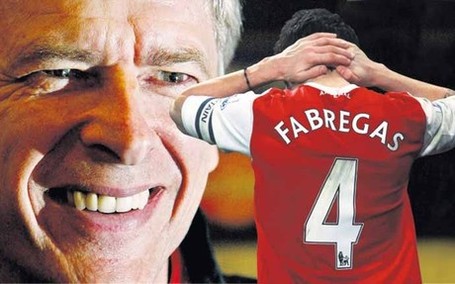 So with Wenger clearly in defense mode: he called out Xavi for saying that Cesc was unhappy, and said publicly that he had decided against "denouncing Barcelona to FIFA," why on earth is Madrid going anywhere near this?

Here's a list of reasons I don't buy this rumor for one second:

Yay gossip! Oh, and I think this might be the first time in the history of Managing Madrid where we've linked to more Barça fanboy tabloids than Real Madrid fanboy tabloids. Weird world we're living in. Now go look at that awesome graphic again.