Share All sharing options for: A Surface Level Glance at Three of Real Madrid's Possible 2011-2012 Formations

We here at Managing Madrid don't only want to wow you with our incredible wit and astonishing good looks--we're also committed to bringing you the most comprehensive, in-depth, and genuinely brilliant Real Madrid analysis on the internet. Unfortunately, this post will satisfy neither of the above qualities (except for the whole astonishingly good looks part): but it will serve to preview what we have in store for you in the coming weeks.

We're planning on ramping up our pre-season analysis as we head into the first real match of 2011-2012 (the first leg of the Supercopa on August 14th), and with that in mind, I'd like to discuss some possible formations that we might see old José go to at various times during the season.

Oh, and I have cool graphics so check it out: 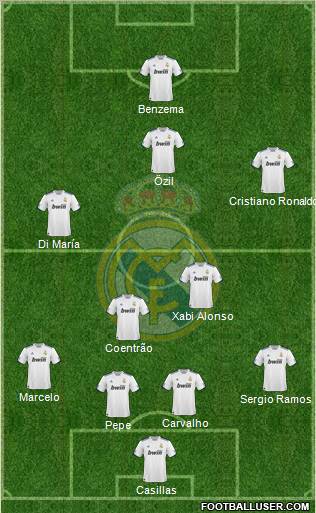 So this is the classic Mourinho 4-2-3-1 that we saw all of last year with one minor change: Fabio Coentrão will slip into the pivot role next to Xabi Alonso, which should give Marcelo a bit more freedom on the left side. Last year, Sami Khedira occupied this role, but he had the tendency to forget some of his defensive duties when Marcelo charged forward. Benzema acts as a false 9, dropping back to combine with Özil, CR7 and Di María (or Callejón or Neymar etc), while Xabi lies back to facilitate the redistribution of the ball. We've seen this already a few times during the preseason, and I'd be pretty shocked if we don't see it quite a bit for Madrid this season.

Unless, that is, Mourinho really takes a shine to Nuri Sahin (and not in just a pivot role, in which case he could come in or Coentrão or Alonso), in which case: 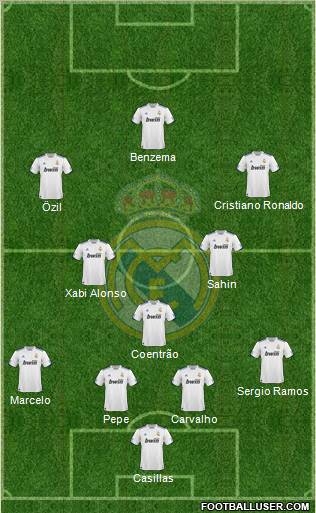 In this very total-football-esque formation almost every offensive player would have  a very flexible position, allowing for an extremely dynamic offensive game. Unfortunately, it would not allow for the tight-knit defensive alignment that Mourinho would likely want to use against more powerful opponents, because it would require a huge amount of defensive switching and movement because of the offense.

It would create a lot of space because Benzema would likely play as a false 9, dropping back and distributing as players made runs into space around him--players like Coentrão, Marcelo, Ramos, and even Pepe would suddenly become moving offensive elements, which increases the possibility that they could get caught out. It would be a very fun formation to watch, and would allow for a lot of possession, but it would be hard to make it mesh with some of the defensive maneuverings that Mourinho would no doubt like to do. 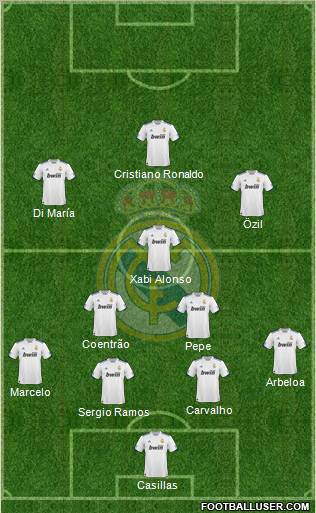 We saw a formation similar to this one in the Clásico rally last season: it worked wonders in most of the games, effectively countering Barcelona's style by plugging the passing lanes in midfield. The key difference here is that this formation could give Madrid even more stability in the back because of the addition of Coentrão. He's so fast, and has been very strong on the defensive end in the past, so his addition could be a real help on both sides of the ball. Oh, and Di María doesn't have to start on the left wing: that could just as easily be Benzema, Callejón, or even Neymar if he comes.

Because this is just a surface level glance, I won't go into the details of the formations and the way they would function on offense and defense; suffice to say that I'd expect Madrid to play one of these three formations in 90% of their games this season.

It's also important to remember that the players in the formations can change: Callejón or Neymar can jump in for Di María, Khedira or Granero could come in to play one of the pivot positions, Higuaín could come in for Benzema or Cristiano (God forbid!) and of course Varane, Albiol, and company could come in to play defense. Oh, and Hamit Altintop can play everywhere apparently.