Here you have it, folks Managing Madrid's Tactical Preview of El Clásico!

At the time of writing, Real Madrd's boss José Mourinho has just confirmed in a press conference that Sergio Ramos is fit to play. This could be key if he plans to play Pepe in defensive midfield, but Mourinho has also said his only doubt about tomorrow's lineup is whether to start Di Maria or Coentrao. Although it is only a matter of one player, the formation depends on this decision.

4-2-3-1? 4-3-3? Di Maria or Coentrao? Mourinho's press conference has been straight on. Ramos is going to play. It also looks like Pepe is going to play as a Center back, because Sami Khedira is ready to start, whether as a partner of Xabi Alonso or with Coentrão and the Spaniard in a three-man midfield.

Against the high-possession system Barça plays, I find essential to press in the midfield. Di María can do this when he is in shape. As a matter of fact, he does it every time, but when he is tired, his offensive contribution is not as valuable as when he is at his best. Copa América and his free days after it have had to affect him, and I am sure Coentrao is more ready to press and contribute on offense both at this time of the season.

So I am more inclined to think Jose Mourinho is going to start Fábio Coentrão in a 4-3-3 tomorrow. 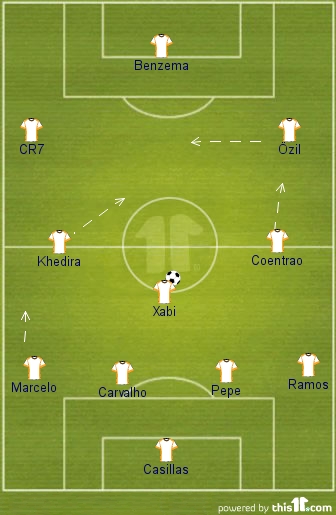 This is pretty much how the team should look while in possession. We know Real Madrid will look for the counter-attack during the whole game. The arrows show the movements the players should execute without the ball. It is likely that Özil will be on the wing only when we are off the ball, and when we recover it, he will shift to the center, while Coentrao takes on a more offensive winger role and drifts into the space the German leaves with his runs. I think the Portuguese will take on his compatriot Pepe's role in the earlier Clásicos: tracking Messi, Xavi and Iniesta down and trying to contribute in offense as much as possible.

We know Khedira plays at his best in this 4-3-3 scheme. This is the position in which he played better last season, and where he excelled in Stuttgart also. Off the ball, he covers Marcelo's flank and helps Xabi. Khedira's absence in last May's Clásico series was key, and his Copa del Rey final performance in which he got injured was simply outstanding. Yet again, his pressence in the lineup tomorrow is vastly important, because it allows us to have Pepe in CB instead of Albiol.

I do not think Mourinho's doubt is simply about which player to start. I do not think that the team should play in this 4-3-3 with Di María instead of Coentrao, nor I think the Portuguese shines in a classical 4-2-3-1 as a winger. I even prefer Callejón if Mourinho has concerns about starting Di Maria because of his form.

Marcelo can focus more on attacking with this formation, as he will have The Panzer Khedira guarding his back, and do not understimate Marcelo's contribution on static offense. It is expected that Real will base his game on the counter, but in some phases of the match we will also have the ball, and the brazilian helps Alonso a lot creating scoring opportunities. Sergio Ramos will have to become a deffensive lock. I still remember Henry's game in the famous and bitter 2-6 or Villa's game at Camp Nou last season (which is probably his best game for Barça). They clearly profited from the Spaniard's lack of focus. He has the potential, but he still needs to be the solid fullback we expected him to be.

Our coach has also confirmed Benzema is starting tomorrow, but said Higuaín can recover the spot at anytime, depending on form.

If all this goes wrong, and Barcelona scores first (let's hope this doesn't happen), I expect Mourinho to introduce Di Maria for Coentrao and play with the classic 4-2-3-1 we've played all through the last season. We also have Kaká (I still belive he can change the pace and flow of a game for about 20 minutes) and Pipa coming off the bench.

If we are the ones who score first, this scheme and lineup is amazing for keeping the score going our way. Mourinho was clear last season about the result he expected in a first leg played at home. He thinks 0-0 against Barça is a good result, and I do agree with him. It is extremely important to prevent them from scoring at the Bernabeu. If we can manage to get a 1-0 result tomorrow, every goal we score in the second leg will be golden, so I do not think Mourinho is going to risk a lot tomorrow. He is smart and he knows goals conceded at home have a disproportionate impact.

Coentrao's position tomorrow is specifically earmarked for Nuri Sahin. Mourinho is confident about his recovery and said he could be ready for the 2nd game of the Liga, or the first if the player's strike finally occurs.

Fear not, we have improved a lot our options. We have a lot more ways to play than last season, and I am sure we will see our team press Barça tomorrow and play on the counter. We have a good chance to get a good result tomorrow, but I still believe the key game of this Supercopa will be the second leg.