While Real Madrid proved yet again that they are a lot closer to FC Barcelona, Real couldn't put the nail in the coffin because of their outrageous luck and the injury of Ricardo Carvalho as soon as the team tied the game.

I am not interested in what Mourinho did at that brawl. I think all the players -from both teams- and coaches, are guilty and responsible of what happened. Jose Mourinho put Coentrão as a LB, when nobody was expecting it. When I first saw the starting XI, I even thought we were going to play in a 3-3-3-1 with Xabi-Khedira and the portuguese in the midfield. Jose Mourinho did not play Coentrão as a LB for one single minute during the whole preseason, and it's obvious that defensive men have to be used to play with each other so they are able to maintain the offside line. Because of that, Fábio was one of the worst players on the pitch during the first half, but he improved drastically in the second, when he played alongside Xabi as a Defensive Midfielder.

The team played a good game. Of course that we didn't dominate as much as during the 1st leg, but luck has not been on our side during this Supercopa. We didn't deserve to lose at Bernabeu and the same happened yesterday at Camp Nou. The fair result was 2-2 and 30 more minutes of soccer in the extra time. I think Mourinho has found how to play Barcelona. 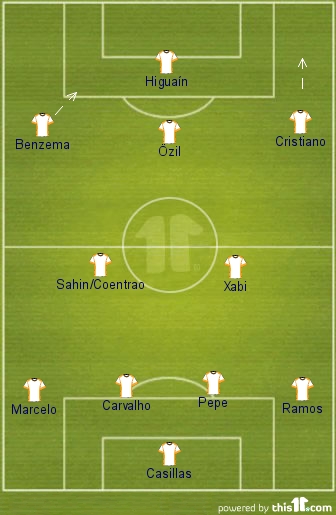 And, if he had the courage to play with Coentrão and Xabi, I think Sahin will be the chosen to take on the role the portuguese played during this second half. He provides all of Coentrão's efforts in defense, while he is certainly a better passer. The portuguese's value as an offensive man lies on his speed and dribbling.
With Di Maria, Cristiano and Özil we would not lack any of these aspects of the game, and Sahin would be more necessary to organize our attack and find the pass-lines.

Despite Marcelo's roughness yesterday, he is key in this team. He helps a lot Xabi Alonso find Özil and Cristiano, our main offensive playmakers. Also, he has improved a lot defensively, and I think Pedro would not have been as comfortable with him playing in that first half. That is the only mistake Mourinho did yesterday as a coach.

About Karim Benzema, he demonstrated yesterday that he is more a playmaker than a pure striker. At least, playing against Barcelona, he has not shown the killer instinct that Higuaín has. When Higuaín entered the field and Benzema moved to the left wing he received many balls and created some scoring opportunities. We have to remember that he played in the wing when he succeeded in Olympique Lyonnais, with Fred as the pure striker.

Of course Karim can be a succesful striker when we play against lesser teams, but I would like Mourinho to start both Benzema and Higuaín against Barcelona if he has to play with the 4-2-3-1. Cristiano could attack the slower Abidal, and he would have to focus on creating chances for his teammates other than scoring. I repeat, I would only consider this lineup -Benzema on the wing- to play against Barcelona, and only if Mourinho keeps thinking on playing in a 4-2-3-1 against them. I honestly didn't believe that the team could play with this scheme against them, but Mourinho has proven me wrong and 4-3-3 is not the only system suitable against them.

I think the team is ready for the challenge, and we will be better during the season after all this frustration we've had during these two games.