Racism and Spanish Sports: A Cultural Perspective in the Aftermath of Barcelona-Real Madrid

Share All sharing options for: Racism and Spanish Sports: A Cultural Perspective in the Aftermath of Barcelona-Real Madrid

Note: this is the first part in a three-part series on racism in Spanish sports that Managing Madrid began after Real Madrid's 3-2 loss in the Supercopa against Barcelona. Expect the second installment on Saturday, and it will address the more immediate issue of racist chanting.

In the 45th minute of Wednesday’s Supercopa de España, Real Madrid left back Marcelo Vieira (a dark-skinned Brazilian-born player from a very poor background) prepared to come on to the pitch against FC Barcelona in the Catalan club’s world-famous home stadium, the Camp Nou. As he strolled to the sideline, chants of "Mono!" ("Monkey!") engulfed the stadium.

Only a few days earlier, Barcelona’s star right-back (another dark-skinned Brazilian), Dani Alves received a similar treatment from Real Madrid fans at the cathedral of soccer in Madrid, the Santiago Bernabéu. Taken in a vacuum, these two incidents might just be embarrassing, even worthy of serious punishment; but they’re actually just recent manifestations of a long tradition of racism in Spanish sports that brings shame on the entire country.

Spaniards have always had a complicated relationship with race: before the reign of the Catholic Kings Ferdinand and Isabel (and the subsequent expulsion of Muslims and Jews during the brutal Inquisition), Spain was one of late-medieval Europe’s most cosmopolitan countries. (And yes, I do think it’s important to go this far back, thank you very much).

The Moorish North African armies of the Umayyad Caliphate managed to conquer most of Spain by around 718 CE, and by the early 8th Century, Muslim Spain had begun to flourish as one of the most important intellectual and economic centers of Europe. Jewish, Muslim, and Christian scholars collaborated to usher in a new era of intellectual curiosity. In general, this was a time of peace in the Iberian Peninsula, as the new Muslim leaders targeted most of their aggression to the Visigothic rulers:

"Christians were promised free practice of their religion and in some cases greater social and economic justice as well. The rights of the minority of Hispanic smallholders were apparently respected. Though Christians were required to pay a special tribute, it was at first modest. In all, exactions were perhaps no greater than under the Visigoths. For more than a century, the Christians in the towns were permitted to live a semi-autonomous local existence, and in some cases shared their churches with Islamic worshippers." Source: Stanley Payne, A History of Spain and Portugal, Volume 1 (Madison, WI: University of Wisconsin Press, 1973).

Muslim Spain had reached its’ peak, however, and by 722 (and the battle of Covadonga, for those who are interested), Christian Iberians had began the exceedingly arduous process of the "Reconquista" or "re-conquest." The frontier between Muslim and Christian Spain fluctuated for the better part of 700 years, until the crowns of Castille and Aragón were united by the marriage of Ferdinand and Isabel in 1469. By 1492, the Catholic Kings had wiped away the last remnant of Muslim Iberia with their victory over the Emirate of Granada.

The seeds of Spanish racial tensions were planted here. In 1492, the Catholic Kings began their Inquisition, first forcing Jews to convert or face exile, then doing the same to Muslims a few years later. (If you care, my family fled Spain in 1492, from Toledo to Tangiers. My grandfather returned in the early 1950's to Madrid, where my father was born.).

A lot more has been, and can still be said about this period in Spanish history; I don’t intend to cover it in depth here. But what I do mean to emphasize is the apparent dichotomy in Spanish attitudes towards race and religion which is inherent in the two contrasting narratives of Medieval Muslim Iberia and Early-Renaissance Catholic Spain. (Even in the famous Spanish epic poem El Cantar de mío Cid, the author deals with religion and race in a distinctly modern way: though the Cid is fighting against the Moors, for the most part they play positive roles in the story, as the main villains, the Infantes de Carrión, are Christians who raped el Cid’s daughter).

A lot of important and relevant things happened between 1492 and 1931, where my story picks up again, but I don’t have time (and you probably don’t have patience) for me to address them here. In 1931, Spaniards formed the Second Spanish Republic after they managed to dethrone fascist dictator General Miguel Primo de Rivera. This Second Republic was famously among the most liberal in the world, and immediately offered voting rights to women and political autonomy to the Basque regions, Cataluña, and Galicia.

Of course, liberal paradises couldn’t last in the early 20th Century, and Spain soon fell to the disease of Fascism, as General Francisco Franco took control following a horribly bloody Civil War (1936-1939). In the aftermath of the tremendous bloodshed, Spain’s newly minted fascist government began a new social program based on the tenets of Anti-Communism, Catholicism, and Nationalism. You can imagine how minorities and immigrants were treated in this system.

So what am I trying to get at? And what on earth does all this have to do with Real Madrid and Barcelona?

Well, it’s certainly more complicated than this, but I’m going to try to boil it down for you: Spain is a bipolar country, which has periodically been swept from side to side in the ideological spectrum. As such, conflicting views on minorities, immigrants, and the rights of women have been spun together and intermixed.

In some ways, Spain is one of the most progressive countries in the world: they were among the first countries in the world to legalize Gay marriage, for example. But in other ways Spain is light-years behind countries like England (and yeah, the United States) in dealing with cultural problems like racism. These problems are especially obvious in sports, when tensions are raised and raw emotions are unveiled; but perhaps the more pressing problems are buried under the surface.

The real problems that this long, complicated cultural history has created for Spain are not evidenced during major sporting events; rather, they are embedded in the attitudes that govern and create these disgusting actions. When Toni Calderón, a man who appeared in black face at a Formula 1 racetrack in Barcelona to heckle England’s Lewis Hamilton (the first Black F1 driver) was asked about his actions, for example, he replied:

"We didn't have the slightest intention of mocking anyone, much less laughing at [Hamilton] because of the colour of his skin," says Toni Calderón, one of those whose painted faces appeared in newspapers across the world this week. "I'm not racist and I'm ashamed to appear as one in the English press."

Calderón says he had wanted to bring a touch of humour to the racetrack and that many at the time thought he and his friends were Hamilton fans." Source: The Guardian, 8 February, 2008.

This is the problem: in many ways, these racist hecklers were unaware of what they were doing, trying to "bring a bit of humor" without understanding the deeply offensive socio-political paradigm they were echoing.

A similar incident occurred before the 2008 Beijing Olympics, when the Spanish Men’s Basketball team appeared in a picture pulling their eyes to the side in imitation of East Asian features. LA Lakers Center Pau Gasol responded with a degree of shock to the uproar that arose, while José Manuel Calderón, a point guard for the Toronto Raptors expressed a similar sentiment:

"It was something like supposed to be funny or something but never offensive in any way," said Spain centre Pau Gasol, who also plays for the Los Angeles Lakers.

"I'm sorry if anybody thought or took it the wrong way and thought that it was offensive."

"We felt it was something appropriate, and that it would be interpreted as an affectionate gesture," Calderón said. Source: The Daily Mail, 14 August 2008. 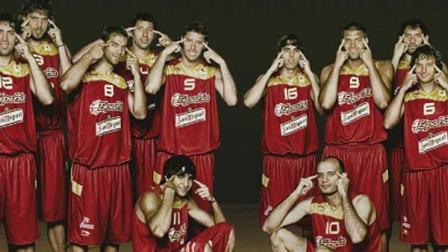 These comments from two star athletes express in succinct beauty the problem with Spanish conceptions of race. It’s a subtle ignorance of the world’s racial dialogue: these players truly did not mean to be offensive, they were probably just responding to a request from a photographer and didn’t bother to think about it.

And that’s the problem. They didn’t bother to think. That’s the issue with so much of the racism that has occurred at sporting events, from the continued jeers at Marcelo and Alves, to the horrifying, unbecoming monkey sounds during a 2004 friendly against England, some Spanish fans just don’t stop and think.

So where does that leave us? We have the unnerving task of education. We have to begin an open dialogue about race in sports, and racism in general. And even stronger than that, we have to have strong, direct, and immediate action against teams, players, and organizations that are implicit in this behavior.

So what would I do about it? For one, I’d shut down the Camp Nou and the Bernabéu for two or three matches. A couple of games suspension for racist chants would begin to do the trick.

But it’d have to go farther than that: there needs to be a systemic, nation-wide campaign to begin a dialogue about race that has been put off for far too long. Spaniards are an amazingly intelligent bunch (and I’m lucky enough to say that I am very proud to be Spanish, having lived a good portion of my life in Madrid, and soon in Cádiz), but in this case it’s not just the stench of a few rotten eggs that’s ruining Spain’s perception around the world.

The problem is endemic, buried in the system, and we need to do the best that we can do eradicate it before it further embarrasses our great sport, and our amazing country.

Keep your eyes out for part two in Managing Madrid's series on racism in Spanish sports, courtesy of our very own Josh Zeitlin.