Share All sharing options for: Introduction and Formation debate.

Hello there, this is Sepioes, a new member of the Managing Madrid staff. As a spanish lifelong fan of Real Madrid, I am going to give you some insight on how I see the team and its environment.

Today I am going to talk about the formations I think Mourinho is planning to use this season.

With the transfers of Coentrao and Nuri Sahin, Mourinho's tactical options have increased vastly this season. I am a radical defender of the 4-3-3 formation instead of 4-2-3-1. While the first one of these formations was used in the big games of UEFA Champions League and against Barça, 4-2-3-1 was the one Mourinho chose against the small teams of the Liga BBVA. It is obvious that when we play against Osasuna, we must have many offensive men, as they will only get to Casillas once or twice in the whole game. But against Villarreal, Valencia, Atletico de Madrid and such, we lack control of the game with a 4-2-3-1. I think Mourinho has brought Coentrao and Sahin because he plans to use a 4-3-3 a lot more this season, even giving more minutes to El Pirata Granero. 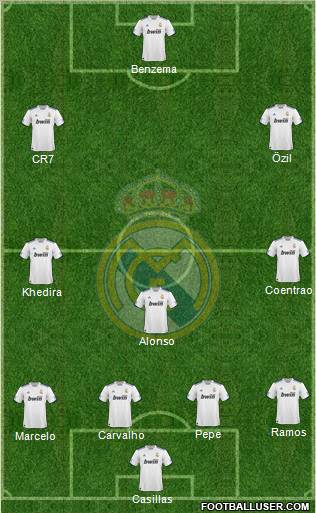 As you can see here, this formation would allow Real Madrid to have more control on the defensive end of the pitch, and with Sami Khedira playing in his natural position (in Stuttgart he was a box-to-box midfielder, something he has not been in RM unless we have played in a 4-3-3) and Coentrao taking the space Özil leaves in the wing when he goes to the center, I do not think we would miss the offensive mindset of a 4-2-3-1.

When Nuri Sahin is fit, he can take on Khedira's position if we need to take more risks in the game, but I think Sami is the real deal on that role.

And of course, if the other team scores first, we could switch Coentrao for Di Maria and go back to the 4-2-3-1, or even better, put Ramos as a CB, Marcelo in the position of Coentrao and play a nice 3-3-3-1 without having to make any substitutions. I remember playing against Villarreal in the Bernabeu last year in these scheme for some minutes when we were losing, and the results were really amazing.

I have to say that we could even play Barça with this formation, playing Coentrao in the role Pepe filled last year (that is taking care of Messi). Coentrao's shape is amazing, and that is mainly what Pepe did in La copa del Rey's final, run after the argentinian, so we could afford to have Pepe in the CB (where he is at his best) and play with our best deffensive line.

When we face the worst teams in the Liga, I think it would be better for Real to play 4-2-3-1 with Sahin alongside Xabi. The turkish midfielder played last season in Borussia Dortmund in these formations and looked capable on the deffensive side of the game, while he really standed out organizing the attack, so he should be ready to play these easier games alone without granting many chances to the other team to score. Last season we struggled against teams like Almeria or Sporting Gijon because they were really focused and disciplined on defense. Playing Sahin alongside Xabi would knock out those problems, but I am not sure about wether Mou is willing to play without a physical midfielder like Khedira or Lass. He played very few games with Granero and Xabi in a 4-2-3-1 last season, but it is true that El Pirata is not as good as Sahin at recovering the ball.

As you can see, playing a 4-3-3 gives us an unbelievable amount of options during the match. I'm not saying we need to copy Barcelona's style, because we do not have to.There are a lot more things in the game of soccer besides the formation, so this would not be a defeat by saying 'We have to play like them to win'.

I am really looking forward to see what Mourinho brings to the table this new season, because I think roster-wise we have improved a lot with Coentrao and Sahin.