We got the win and that's what ultimately matters, but the team didn't play well at all, specially on the defensive side of the ball. Getafe caused us a lot of problems, which I think was due to Coentrão's hyperactivity. He helped the team quite a lot offensively, but Xabi Alonso was often by himself when Getafe recovered the ball. They were able to keep possession in their counter-attacks just because our midfield was non-existent.

You've got to love the guy's effort, but yesterday I missed Khedira/Sahin/Lass. Coentrão is a wing-man. That's where he is at his best, but since none of our true midfielders are healthy, it's good that we have a player like him to slot into that position.

It's pretty obvious that Mourinho asked Coentrão to play like that. It's a good option when you need to score. The Portuguese midfielder was almost finishing plays in Özil's position, but as soon as Cristiano scored the penalty kick, Mourinho should have told Fábio to be a little more organized. The team was absolutely broken, with a lot of space between our strikers and our midfield--which essentially amounted to just Xabi. It would have been interesting to change the system, inserting Granero for Özil to gain some more protection in the midfield.

On the other hand, I liked Kaká's contribution. He gave pause to the team and delivered a good pass to Higuaín for the fourth goal. The Brazilian is looking better to start the season, and I think he will be important at some point. Maybe Mourinho is planning to start him in some of these games, so he can get used to the rhythm of the team during a 90-minute game.

Mourinho is probably planning to start the same team Wednesday against Zagreb, since neither Khedira nor Sahin is ready to play, and it would be risky to start Lass since he has not practiced with the team during the summer. Coentrão needs to think more when he plays as Alonso's midfield partner. I am really looking forward to Nuri Sahin. He is the kind of player that gives you Fábio's effort offensively, while he helps the midfield too.

Marcelo's contribution seems smaller when Coentrão focuses so much on attacking. The Portuguese player usually goes to the left wing to make the plays, and with Cristiano there as well, Marcelo has no room to operate. It would be more interesting if Fábio could go to the right in his offensive raids. Ramos is not that much of an attacking fullback and Di Maria is usually too lonely there. 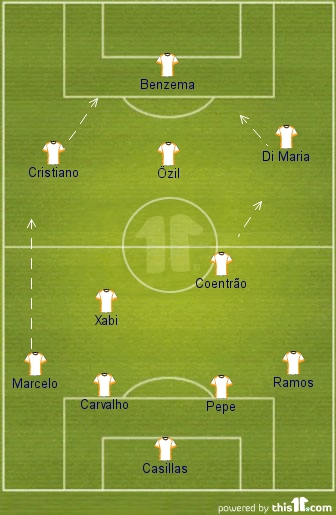 In the image to your right you can see the movements I am talking about when we have possession of the ball.

This should be really useful when playing against lesser teams at home, but Fábio needs to get back so we don't lose the midfield battle like we did yesterday. When Sahin or Khedira are ready, the scheme should be more normal. Since neither one of them like to drop to the wing as much as Fábio, the team will be more balanced.

I don't know what Mourinho is planning to do with Sahin, but I think he is the real deal for games like yesterday. He is probably not ready to play alongside Xabi Alonso against the European elite, and I would like to see Nuri, Xabi and Khedira for these harder games. That would be a solid and creative midfield, while Di Maria could join the game in the second half if the things are not looking really good and we need to score.

We will see have to see what Mourinho has planned for Wednesday's game. I expect a more serious rival, so if we don't improve our game, we will have a hard time getting the win.