Jose Mourinho is finally able to fully dedicate his time to the game against Barcelona as this week of la Liga play has finally ended. His team is hoping Ángel Di María recovers from his injury, but the Argentinian remains doubtful about his return.

After the loss suffered last December against FC Barcelona, it has been proven that the best possible formation to play against Barcelona is a 4-3-3 with a high-pressure system in the middle. This is exactly the same formation Real Madrid played in the last Copa del Rey Final that saw Mourinho's team earning a deserved win in overtime with a late goal by Cristiano Ronaldo.

There are two main differences between Madrid's soccer in the Copa del Rey Final and the formation they used during the Champions League Semis:

Pepe's physical presence should be used to press Barcelona's midfielders instead of just playing ahead of the defensive line. He completed an absolutely brilliant game in the Copa del Rey Final by disallowing Messi from even receiving the ball. He also contributed to the good offensive game Madrid completed, and he surely deserved the goal that went away in the first half when his header hit the post. 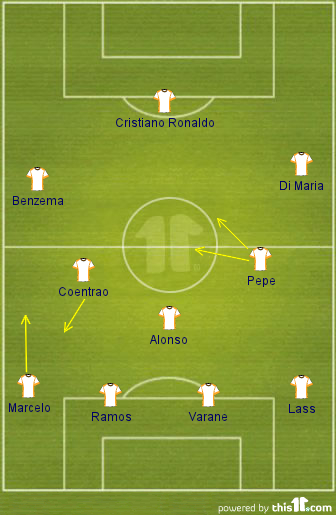 In the other games Pepe has been moved to Alonso's position. That might be because Mourinho wants to play a little more defensively by not pressing Barcelona's players that much and trying to recover the ball without taking the obvious risk of playing with a high-pressure system.

In order to stop Barcelona's game and put the match in our own hands, Mourinho needs to recover the 4-3-3 system he used in the Copa del Rey Final, when Cristiano Ronaldo was the only offensive reference ahead.

We need everybody to press Barcelona in the midfield, and that's why Cristiano Ronaldo cannot play in the wing for any of these games. Karim Benzema has improved a lot in the pressing, but Higuaín could take that spot as that's one of his major skills.

If Di María is not healthy, Mourinho should consider playing Callejón in that position. The Spanish winger is the only player that can match Di María's defensive skills while contributing offensively as well.

With Arbeloa out of the game, Lass should clearly be the right back. He could also play in Coentrao's role, but in that position he usually sees a yellow card very quickly, and that is something that would make Barcelona more comfortable.

Real Madrid needs to start the second half with three midfielders without yellow cards, especially Pepe. He needs to be the one who chases Xavi, Iniesta and Messi down, so he needs to be calm and relaxed about fouling.

Varane should be the other starting center back. He is a lot faster than Albiol and he deserves some important playing time as he has not commited any major mistakes recently.

Marcelo's attack could be covered by Coentrao if Barcelona wants to go on the counter attack. This is something Madrid is missing with a 4-2-3-1 formation, and with Coentrao in that part of the midfield, Marcelo could cover his position more easily; he would only need to go to the midfield and then return to the left back position as soon as the play finishes. Coentrao's intensity could also be very useful in this game.

With this formation, Barcelona would have the possession in areas that are not as dangerous. Real Madrid could start pressing as soon as the ball passes the middle of the field. If you want to see exactly how this system works in action, you should definitely take a look at last year's Copa del Rey Final. That game shows that you can dominate the match without having to control the ball the whole time.

If the game is not going well, Mourinho could replace Varane for an attacker, move Coentrao to the right back and Lass to the midfield in order to play with a regular 4-2-3-1 formation. However, this only applies if Barcelona manages to score early on and the high-pressure system is not working.

Mourinho and Real Madrid players should be really confident about this lineup, which should prevent Barcelona from controlling the game. Real Madrid could keep keep his sheet clean while scoring one or two counter attack goals, if everyone commits themselves to winning.

In these two-legged games, the main goal is to prevent your rival from scoring in your stadium, so that should be Mourinho's focus if he wants Real Madrid to advance to the next round.