The Pepe Controversy And The Spanish Press: Are 'Marca' And 'As' Really Real Madrid's Newspapers?

Share All sharing options for: The Pepe Controversy And The Spanish Press: Are 'Marca' And 'As' Really Real Madrid's Newspapers?

It's a common belief that, while Mundo Deportivo and Sport are FC Barcelona's tabloids, the dailies Marca and As are biased in favor of Real Madrid. However, these two Madrid-based tabloids show a very different criteria from their Catalan counterparts when something bad happens to "their" team on the field.

Would a Real Madrid-supporting newspaper use the headline 'He's dead' about a player (if he wasn't actually dead)? It's always good to criticize, but Marca and As usually go too far.

Let's look at some examples: during this summer's Spanish Supercup, Real Madrid and Barcelona were involved in a big confrontation--both on the field and off. David Villa allegedly insulted Mesut Özil's religion, and the German punched him. Marcelo tackled Cesc Fábregas very violently and saw a red card, while Mourinho poked Barcelona's Assistant Coach Tito Vilanova in the eye.

Mourinho and his players were the main focus in the next day's press, and both Marca and As (and of course Sport and Mundo Deportivo) blamed Real Madrid for what happened at the end of the match.

Every Spanish journalist seemed to be worrying about the Spanish National Team, and whether they would tear apart due to infighting: these same journalists worried about how the Spanish team was going to behave in its' next game against Chile. At the end of that match, another fight broke out; the only difference was that this time, (FC Barcelona's Sergio Busquets came to (Real Madrid's) Alvaro Arbeloa's rescue while (Real Madrid's) Sergio Ramos defended (Barcelona's) Andres Iniesta from Chilean attacks. 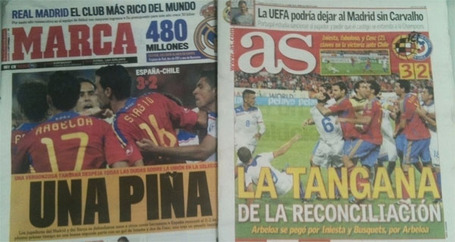 This was the reaction of the press to that incident: Marca used the headline 'One Team' on their front page, while As saw what happened as 'The Fight of Reconciliation'. It's curious how the perspective of the press changed when the Spanish players were the ones involved in the fight: from 'This better be the last time' after the Supercup game, suddenly, fighting became positive, and showed how united the team was.

Pepe walked on Messi's hand last Wednesday and the whole media exploded all over again, but nobody said a single thing about Soldado stamping on a Levante defender in Valencia's game last Thursday:

Agresión Soldado a Cabral (via Fdkn)

There's not that big of a difference...other than Soldado's passport and club.

Here's a link where you can see a video showing Real Madrid fans asking for Mourinho to leave. From an 80,000 people crowd, Marca only showed ten fans wanting Mourinho's head, and somehow draws the conclusion that Real Madrid's fan base wants the Portuguese coach to leave.

But this was not the first time that Marca has arrogantly assumed that they have the authority to bring a new coach to the team. During Manuel Pellegrini's stint with Real Madrid, Marca's cover read 'Pellegrini, get out' after the 4-0 loss in Alcorcón. But after the Liga finished with a 1-1 draw in Málaga, they crossed the line. 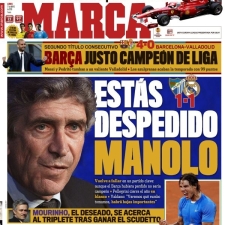 Madrid's fans might have been divided about Pellegrini, and it was fair to say that the team could've done better. But you could also argue that he had just completed a good campaign and that the team needed to trust him for another year. That's not the point. Marca does not have the right to demolish a coach just because they want to. They may completely control some of their readers, but they must not be in charge of the team.

Something similar might occur with Jose Mourinho this season, but many of the fans in the Bernabeu (and specially outside of it) still want him as coach. This time, however, most madridistas have realized how bad Marca and As are for the club's interests, and some have even created hashtags and a twitter account (@BoicotAsMarca) to protest their arrogant semi-journalism. We here at Managing Madrid call on these journalists to wake up and start informing--doing their real job--instead of trying to control the club with their fake-news propaganda.