With last Wednesday's 1-2 loss against Barcelona, Real Madrid will need to score at least two goals in the Camp Nou to advance to the next round of the Copa del Rey. That probably means that Mourinho's team will not play this match with a defensive mindset.

The team should try to reproduce the 4-2-3-1 formation that they used against FC Barcelona last August in the Supercup games. In those two matches Madrid drew one and lost another, but the team proved that they were able to score against Barcelona.

Last week's formation couldn't stop Barcelona's possession game. The team missed Khedira's physical and tactical presence alongside Pepe and Alonso a lot. The Spanish midfielder doesn't shine as usual when he is away from the ball and lacks the speed to press and chase Barcelona's players down. Pepe played in Alonso's spot (ahead of the defensive line) and moved the former Liverpool player to the right side of the midfield. Lass and Pepe both switched positions on the left side constantly.

Mourinho's plan worked until Barcelona scored their first goal off a set piece. When that happened, Real Madrid was forced to introduce offensive substitutions and the team was already caught in Barcelona's trap (playing the style Barcelona wants them to play).

With Pepe possibly out and with the added need to score, Mourinho might be thinking about playing Kaká, Özil, Cristiano Ronaldo and Benzema in the attack. Kaká looked quite good aginst Athletic Bilbao, as did Özil. To score two goals against Barcelona is possible, but if Barça scores one the game would go into overtime. What the team needs is to score and defend well also.

Barcelona will surely dominate possession because there's no other team in Europe that is able to compete against them in that statistical matter. Guardiola's team will probably use this possession a little bit more defensively than they are used to, as they can't afford Real Madrid to go on counter attacks a lot. That would be the way Mourinho's team could score one or two goals, so look for Barcelona to keep possession and wait for Real Madrid to press and leave spaces Guardiola's midfielders could benefit from.

Alvaro Arbeloa should be back in the lineup, so the defensive line should be composed of himself, Varane, Ramos and Marcelo/Coentrao. The Brazilian is a better offensive player, so Mourinho might be thinking about him playing in that spot.

That would mean Xabi Alonso and Lassana Diarra play in the midfield. These two men are not a guarantee right now, but with Nuri Sahin out of rhythm, the only other player could be Esteban Granero or Coentrao. The Portuguese was the one that played alongisde Alonso during the Supercup and did well pressing, but he has not seen any more minutes in that position. 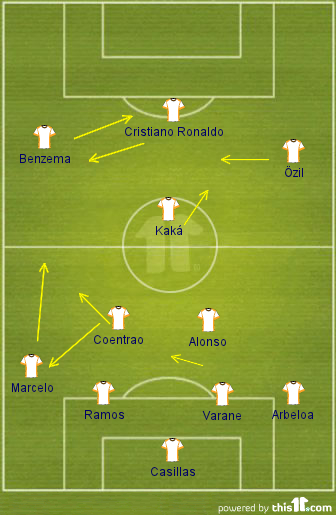 Given that Lass would be the only defensive reinforcement off the bench if Madrid manages to score two goals and wants to play defensively, Coentrao might be Mourinho's choice for the midfield. He could cover Marcelo's runs to the attack, because he is a pure left back, and he also has the energy to chase Barcelona's midfielders down.

Alonso would be Real Madrid's pivot. If he is fit and has a good game, and Coentrao helps him, Alonso could cover a lot of ground. He is very smart and has a very good tactical knowledge of the game.

Karim Benzema and Cristiano Ronaldo could switch positions upfront, and Kaká would be the one launching the counter attacks with his speed. With this formation, Kaká is the most important player on the field with maybe Alonso. If the Brazilian manages to make good decisions and finds the space to be successful in offensive transitions, he will be very harmful.

If Di María is back, Özil could be on the bench to provide a much needed offensive spark if the team is not getting to Barcelona's part of the pitch with danger. The Argentinian winger presses a lot and is a key part of Mourinho's plans for every game against Barcelona. He is also a very good weapon on the counter attack.

Unfortunately for Real Madrid, the team will need to risk a lot in order to score, unless they manage to score early on a set piece. If the merengues could profit from their good aerial game offensively off a corner kick, that would allow the team to gain confidence and force Barcelona to be a lot more cautious.

The Clasicos are always games where the player's mentality is very important. Real Madrid needs to start the game with energy in the midfield so Guardiola's team knows Madrid really did come to play and get the win.