Share All sharing options for: Real Madrid Tactics: Kaká And The "False 5"

The idea of specific numbers being assigned to specific duties, or players, on a soccer pitch has a long history. The early rules of association football in England required that all the starters wore numbers 1 through 11 in sequential order, beginning with the keeper (these rules were in effect as late as 1993 according to some sources). As such, these numbers were eventually related to the positions of the players that wore them: "1" became the keeper's number, "10" the organizing, attacking midfielder, and "9" for the striker. The numbers in between all have different histories as well, though they tend to be slightly more murky than the ones I've just outlined.

Take the number 5: the two greatest players (in this author's opinion) to wear the number 5 shirt for Real Madrid are creative midfielder Fernando Redondo and attacking midfielder Zinedine Zidane (though defenders like Fabio Cannavaro and Manuel Sanchís also sported the number). Traditionally speaking (and in this case "traditional" means "coming from Argentina"), the number 5 shirt was worn by the central defensive midfielder, the creator and organizer of offensive play.

Fernando Redondo, the legendary Real Madrid central defensive midfielder exemplified the qualities of a traditional Argentine "5": working from behind the action, he funneled the ball around the attack, creating plays using his vision--and on occasion his speed.

So what does all this have to do with Kaká? you ask. Real Madrid already has a Redondo-like "5" in Xabi Alonso. Very true. But what I'm proposing is something a little bit different, and possibly not that extraordinary: that Kaká could function as a "False 5," a player who lines up as a "5," but plays something completely different.

Take the basic Real Madrid setup: a 4-2-3-1 featuring Sami Khedira and Xabi Alonso in the central defensive pivot, with Angel Di Maria on the left wing, Mesut Özil directing play in the middle, and Cristiano Ronaldo on the right. We've seen this formation time and again this season, and last, and we've consistently commented that, while the formation functions relatively well on offense, it lacks significantly on defense, and can, at times, become stagnant on offense if Özil is off.

We've also seen Mourinho transition to a 4-3-3 at various times to counter the previous formation's defensive malaise, while maintaining some possession. The 4-3-3 tends towards focusing on defense, however, and while it has had strong results at times, over the past few weeks we've seen it come under heavy fire from they-who-must-not-be-named. In fact, Mourinho's Real Madrid has had stronger results against arch-rivals FC Barcelona using the comparatively offensive 4-2-3-1 (last week's Copa del Rey 2-2 draw, as well as both legs of the Supercopa).

So what does this all have to do with a "False 5"? Well, I've created this idea to deal with a specific need: how Real Madrid can merge the defensive prowess of the 4-3-3 with the creative potential of the 4-2-3-1. Obviously, this isn't a perfect solution (what is?), but hear me out nonetheless. Kaká should line up next to Xabi Alonso and (eventually) Sami Khedira (or Lass, Coentrao, whomever) in the defensive midfield trivot of a 4-3-3 (looking like a "5"--a creative offensive director in a deep-lying role), then play like a "10" next to Özil. Here's what the lineup would look like visualized: 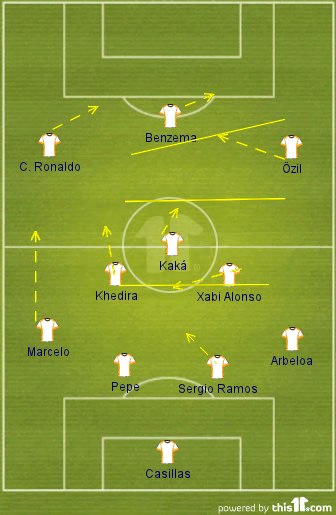 As you can see, the initial "formation" is a 4-3-3, Real Madrid's defensive set. Upon closer inspection, however, this formation quickly becomes a 4-2-4 or a 4-1-5 as Madrid transitions into attack. As I've said before, offensive football is all about space: manipulating the areas of the pitch, and the opposing defense, to give individual players room to flow. It's complicated to talk about formations when teams have the ball because players shift, change position, as the ball moves around the field (and the spaces in the opposing defense become more obvious).

But let me explain this using the semi-irrelevant terms of formations: though Kaká lines up as a CDM he becomes a CAM when Real Madrid have the ball. The yellow lines represent the zones of the pitch that, theoretically, would be covered on offense by the three playmakers--Xabi Alonso, Kaká, and Mesut Özil. In practice, of course, these zones would fluctuate heavily depending, among other things, on how the opposing defense lines up.

As we move around the pitch we see the different movements that are typical of Madrid's other players: Sami Khedira tends to push up to support the offensive line, Marcelo barrels down the left flank with abandon, and Sergio Ramos tends to play slightly higher up the pitch than Pepe for the most part. These are all just minor details at first glance, but they become much more important when Madrid is faced with the typical problem of their version of the 4-2-4/4-2-3-1: a rapid counter-attack down Marcelo's flank.

In the next image we have the offensive formation in

relation to an unexpected change of possession: the filled-in lines represent the responsibilities of the offensive creators, while the dotted lines represent the defensive responsibilities of the main counter-attack defenders. As you can see, a lot of emphasis is on Sami Khedira and Pepe to make up for a counter-attack on the left flank. This, however, is nothing out of the ordinary for Real Madrid, and tends to be less important in the 4-3-3 defensive set. In this case, the defense resembles the 4-3-3, as Khedira takes on a more subdued offensive role than in the 4-2-3-1, and is thus farther back, and more able to help on a left-sided counter attack. 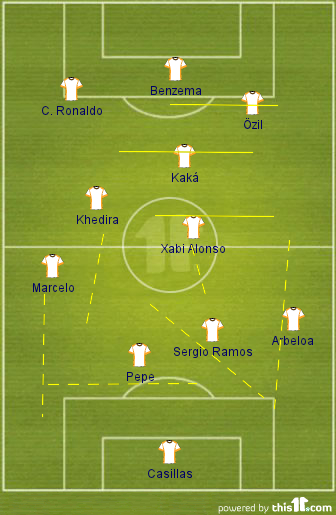 Obviously, the image reflects a situation where Madrid has lost the ball and when Pepe and Ramos have run back to their original positions. In most cases, Pepe and Ramos will play closer to the middle of the field, and will thus have to back track quickly to deal with a counter attack. This formation sets up some help, in the form of a trailing Khedira, to deal with the real danger in a left-flanked counter attack: the trailing midfielder (remember Barça's third goal in the 1-3 earlier this season?).

The real difference this formation has from the 4-2-3-1, however, is in the defensive alignment. In the image below you see the key difference: Madrid can effectively crowd the center à la 4-3-3 while maintaining the counter-attack and offensive creative potential of a 4-2-3-1.

extremely important on defense (where he has been very competent this season), as he slots into the 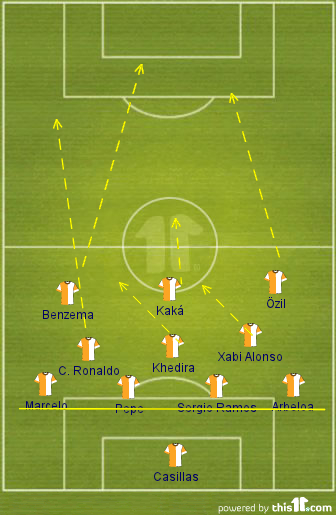 defensive trivot instead of Kaká!

In the image (pardon the change of kit color, a time-sucking mistake that I don't feel like correcting because it would mean re-doing this entire effing graphic), we can see how the team could defend a pressing Barcelona (for example), without ceding their creative counter-attack. Kaká takes on the center pressing role on the opposing side's CDMs, while Cristiano Ronaldo shifts to the defensive trivot, and Benzema shifts to the left to press in the Cristiano Ronaldo-esque role.

Obviously, this formation depends on players being multi-functional, especially on defense. Cristiano Ronaldo has to be able to defend in the compact area; Benzema has to press well on the wing; and Kaká has to become the primary creator of offensive counter-attacks (though he could switch roles with Mesut Özil rather easily).

This formation would not have the same defensive solidity as the Pepe-Alonso-Lass trivot we saw in the 1-2 Copa del Rey match, but it would also retain the attacking (and pressing) of the 4-2-3-1 from the second leg of Madrid's Copa tie against Barcelona.

As I said earlier, this formation isn't perfect. And sure, it's probably not revolutionary (or even untried). However, Mourinho could easily employ the concept of the "False 5," especially with a Kaká who is regaining his form, and has clearly begun to transition his game towards a more assist-oriented style.

Join in the conversation about the "False 5" and all things Real Madrid by liking us on Facebook, following us on Twitter, and subscribing to our podcast on iTunes.