Cristiano Ronaldo could've completed one of his best games as a Real Madrid player the same day his team only drew against City, and without him scoring any goals. Is that even possible? In this article, Cristiano Ronaldo's game will be deeply analyzed with both data and video.

If you buy something from an SB Nation link, Vox Media may earn a commission. See our ethics statement.

Share All sharing options for: Cristiano Ronaldo's Game Against Manchester City Was Legendary But Went Unnoticed

How good can Cristiano Ronaldo be? Everyone should try to answer this question without naming Leo Messi on the same sentence. Messi is not a relevant aspect on Ronaldo's game. This time, the Portuguese player will have the spotlight in what was one of his best games as a Real Madrid player.

The Portuguese star didn't score, that's true. He even missed a clear chance in the first half when he tried to flick the ball over Joe Hart. He succeeded, but a Manchester City defender cleared the danger just when the ball was about to go in. Considering how good Manchester City was in the second half, Cristiano Ronaldo's importance should be noted more than when he scores four goals against Bilbao or three against Levante.

Even though performance scores do not reflect precisely how good a player was (Nastasic managed to get a 7.5 in WhoScored, for instance, better than any other Real Madrid defender including Coentrao), Ronaldo still was the Man of the Match in WhoScored.com. That's a start. Casillas, Pepe and Ramos tried to find Cristiano Ronaldo in every long ball, and still the Portuguese player gained the ball 33% of the times against aerial specialists like Kompany and Yaya Touré.

There's more. He had an 87% pass success and suffered five fouls called. Rocchi didn't see at least three more of them by Kompany and Zabaleta, but we will take that number. Still, what should amaze every football fan is Cristiano Ronaldo's heatmap against the reigning Premier League champions.

Below is Di María's heatmap. In that one, you can see how well he helped Álvaro Arbeloa deffensively. He didn't move much to other parts of the field when he had the opportunity though, as it can be seen on the image. 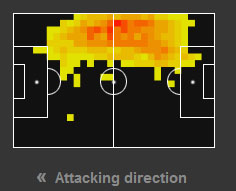 Ronaldo was different. He created a lot of passing lines for his teammates to use. It's clear that Cristiano Ronaldo is a lot more comfortable with Benzema on the pitch rather than with Higuaín. The French striker understands spaces a lot better, and that's what Ronaldo ultimately needs to play an excellent game.

As you can see on Ronaldo's heatmap, he did cover an incredible amount of ground. He attacked both through the left and right wing, and he also helped the midfield. 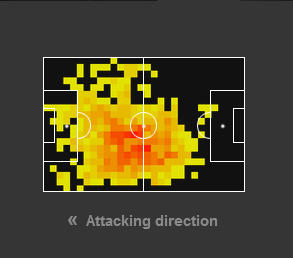 He played very deeply and reached the end of the left wing many times as well. But that's not all, Cristiano Ronaldo was in Manchester City's box a lot of times.

He's not a usual striker. He played in four attacking positions against Manchester City. In total, he ran 10km. Those are very good numbers for any striker (one would say Di María worked a lot more, but he ran 10km as well, even though the Argentinian player left the pitch in injury time).

It's about time for Real Madrid fans to realize how important Cristiano Ronaldo is to this team. It's normal to prefer some players to others, but what this guy is doing for Real Madrid isn't normal.

He's scored 165 goals in 163 appearances with the club. That's right, he has a 1.01 goal-scoring average with Real Madrid, in what's the highest average in the club's history. The Santiago Bernabéu won't probably realize what we try to state in this article, but this player is a legend and should be treated as one.

Cherish this moment. Cristiano Ronaldo is playing for Real Madrid. And enjoy his highlights against Manchester City.