Real Madrid Vs. Espanyol, La Liga 2012: The View From The Press Seats

It's always good to watch football live. TV broadcasts sometimes don't show interesting tactical movements such as Khedira and Modric playing in the same line ahead of Xabi Alonso or Özil tending to go to the center of the pitch even though he was supposed to play on the right wing.

Share All sharing options for: Real Madrid Vs. Espanyol, La Liga 2012: The View From The Press Seats

As you know, Managing Madrid enjoyed a neat opportunity to cover Real Madrid's match against Espanyol thanks to the club's press department. In this article, we'll go deep on how the team played, so this would be some sort of a recap taking profit of the opportunity to watch the game live in such good seats. 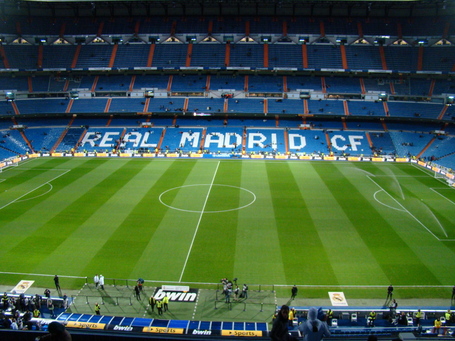 The first thing I noted was Modric's positioning. Real Madrid played with a 4-1-2-2-1 throughout the whole first half. Instead of playing as an attacking midfielder, the Croatian player had Khedira to his side helping a lot offensively. Nobody trusted this movement by Jose Mourinho, but Khedira was the one that assisted Cristiano Ronaldo in Real Madrid's first goal. Modric wasn't playing bad, but Mourinho wanted to play a little bit faster, so he changed him for Di María and moved Özil to the attacking midfielder position.

It's odd, but Özil almost played as Real Madrid's second striker, when he's a playmaker. Di María was Real Madrid's catalyst, so Mourinho's substitution was spot on. The bad thing is the team couldn't capitalize the good chances Espanyol conceded.

In the first half, Callejón was Real Madrid's forward. Cristiano Ronaldo's favorite position is on the left wing to then shot from the outside or run to the box, but he should've played in the middle instead of a Callejón who seems very sloppy when given the chance to start the game. He always tried to break down Espanyol's defensive line with his runs, but Aguirre's team was well organized to prevent those runs with a 4-5-1 system in which only Sergio García didn't work defensively.

It's obvious that Mourinho would've liked to re-introduce Modric as soon as Real Madrid score the 2-1 goal (if possible). His slower tempo and control of the game could've been very effective when Mourinho's team was already ahead. One way or another, Real Madrid had the chance to score at least two more goals but ended up conceding off a set piece in the 88th minute.

The team will now have a tough challenge in Málaga before entering Christmas' break. It'll be hard for Real Madrid fans to be optimistic about that game consdering Madrid's struggles on the road, but the team's good streak has to come sooner rather than later. It can't always be this bad.