Real Madrid took on Rayo Vallecano yesterday in what turned out to be one of the worst performances by the whites under Jose Mourinho. The shortcomings were largely due to the subpar performances from all of the players except Iker Casillas, Sami Khedira and Marcelo. Despite Real Madrid being the second best team on the field yesterday, Mourinho's tactics ensured that los blancos walked away with three points.

Jose Mourinho chose to start the usual back four of Arbeloa, Pepe, Ramos and Marcelo, and placed Khedira and Kaka alongside Alonso and Ozil, respectively. Higuain started up front in the absence of Karim Benzema.

Mouriho's inclusion of Khedira and Marcelo proved successful; the German continuously battled the physical offensive midfielders of Rayo while the Brazilian's daring runs provided some spark in our unusually quiet attack.

The inclusion of Kaka as the CAM seemed to be beneficial after the initial five minutes of the game when los blancos started to put some passes together. However, Rayo quickly mounted the pressure and the small field and physicality of the opponents proved too much for Kaka who was unable to influence the game any further. Due to the high-pressure system used by Rayo Vallecano and constant loss of possession by Real Madrid, Ozil also did not see much of the ball and instead tried to recover the ball. In addition, the lack of possession and creativity resulted in Higuain disappearing from the game. Even Cristiano Ronaldo looked unusually quiet.

Having realized that the field was too narrow, Mourinho made changes to his side that looked very similar to what we had previously seen in the second leg of the Supercopa vs. FC Barcelona. Shortly after Ronaldo's goal, Fabio Coentrao was introduced in place of Kaka, claiming the left back position. Given the absence of Karim Benzema and Angel Di Maria, this was the best possible substitution by the Portuguese tactician, as it allowed Marcelo to move to the left wing and forced Ronaldo to switch to the right wing. Real Madrid suddenly started to look more solid as Coentrao made fine interceptions and Marcelo took advantage of the narrowness of the field with his vertical runs. 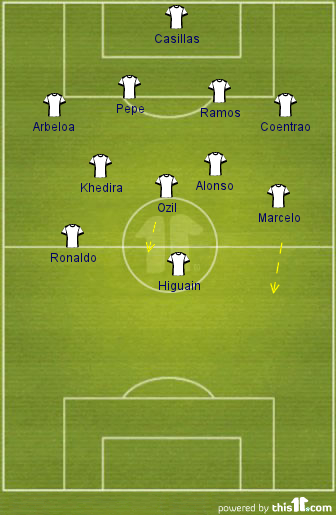 Being a goal down, Rayo moved men forward and at times looked to be in a 4-2-4 formation. Madrid in turn tracked back to protect their lead. Mourinho again recognized the problem and brought on the speedy Jose Callejon in place of the quiet Higuain and switched to a 4-4-2 formation, playing Ronaldo and Callejon ahead of the midfield. This strengthening of the wings forced Rayo's hand into attacking more from the centre and relying mostly on set pieces. Once again, Real Madrid's manager prevailed by introducing Granero in place of Marcelo in the last 10 minutes of the game. 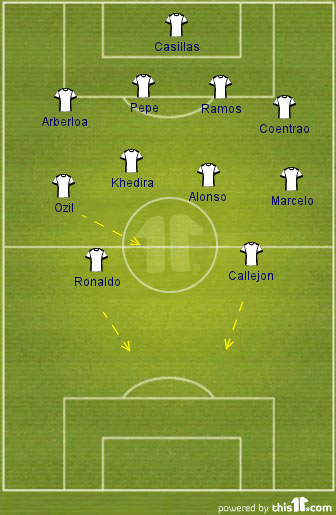 Why are these tactical changes important? It's simple--the away goal advantage that Madrid carry into the second leg of the Champions League clash vs. CSKA Moscow means that much like Rayo Vallecano, Moscow will most likely apply a high pressure system against us and will come all out to attack. For this reason, the champions league game might require a lot of the same tactical and personnel changes that we saw yesterday. Having already tested these changes against Rayo Vallecano will give the players and managers better familiarity with the system and more confidence.

The recent dip in form and injury to some of our players will make the next couple of weeks difficult for Real Madrid. Madridistas should be glad to have a coach with back up plans and the ability to react during the game. It is a privilege that other top teams in the world do not have.

Do you think Mourinho got his tactics right against Rayo Vallecano? Should we be worried if CSKA Moscow decide to use the same strategy against us? Let us know in the comments!