Good news on a cold day in Spain: Real Madrid's injured players appear to be returning en masse this week, after many weeks of absences. Defensive midfielder Sami Khedira and winger Angel Di Maria have both been declared ready for Real Madrid's match against Levante in the Santiago Bernabéu, and injured left back Marcelo has begun practicing with the ball. If he progresses on schedule, the Brazilian back should also be cleared for Sunday's tilt.

These recoveries could not have come at a better time for los blancos: Sunday's match against Levante is extremely important, especially because Madrid lost to Levante during the first half of the season. The key to winning la Liga is maintaining the high level of form that Madrid showcased over the last couple of months--basically since their loss at Levante. The idea is to try to drop only as many points as they dropped over the first half of the season, if not fewer, and a win against a side that has already taken points away from los vikingos is a great way to start.

Both Khedira and Di Maria have been integral to Madrid's success this season: Di Maria, for one, is leading la Liga in assists with 13, while Khedira's combination of defensive intelligence and offensive versatility has come in handy in tough contests (remember that close match in Valencia?). Both players should immediately slot back into the starting lineup, possibly at the expense of Kaká and Lassana Diarra or Esteban Granero. Who do you think should lose their starting job?

In non-Real Madrid news, ex-Madrid coach Fabio Capello resigned from his post as manager of England. I don't know if this affects Madrid in any way, but it is interesting news nonetheless. Who do you think should take over from him?

And finally in non-soccer news, Sami Khedira posed for GQ Germany with his stunning wife. Here's a link. (And there's a picture after the jump). 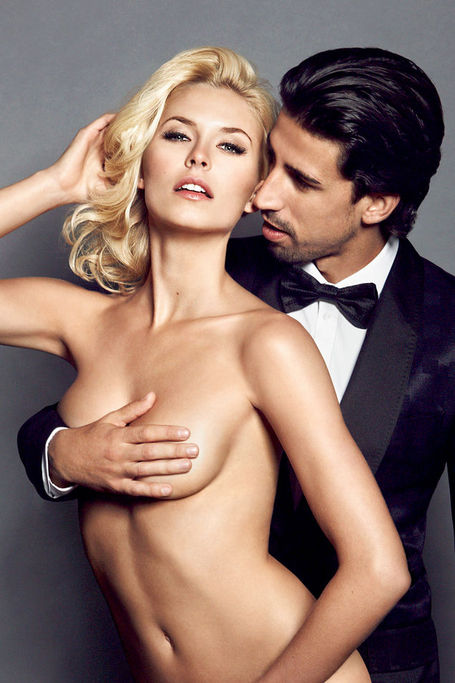