Real Madrid faces a potentially complicated opponent tomorrow in Real Sociedad. The match against Villareal has left los blancos somewhat depleted, but true champions make the best out of every situation. In fact, Real Madrid should look at the recent suspensions as blessings in disguise.

Mesut Ozil has had little rest ever since Di Maria's injury and could definitely benefit from a weekend off especially since he needs to come back with guns blazing given the absence of Xabi Alonso next Tuesday.

In addition, Lass Diarra's suspension will mean that his yellow card record is clear so he can be counted on during next month's tough fixtures. These suspensions will also give players such as Albiol, Altintop and Varane a chance to get some minutes and stay in form. As has been stressed before, all players should be in top form during April.

Perhaps it would be beneficial to the team if Cristiano Ronaldo were to get his fifth yellow of the season against Sociedad, clearing his record of yellow cards. He would have to miss next week's match against Osasuna, but could come back better than ever to help demolish teams in April. Indeed, if he were to serve his suspension against teams such as Atletico Madrid, Barcelona, Valencia, or Atletic Bilbao, his absence would be missed dearly.

Despite the possible gain from the current situation, the number of injuries and suspensions going into Saturday's match could negatively affect Madrid's record. A loss or draw will not only make the league even harder to win, but it will crush our confidence. Real Madrid cannot falter--there is more no room for errors (free kicks).

With the absence of Di Maria, suspension of Ozil, and the recent dip in form of Xabi Alonso, los blancos will depend on the services of Kaka for creativity in the midfield. The former Ballon d'Or winner has regained his form and has shown moments of brilliance in recent games. His pace looks to have increased and his runs into the penalty area from the left side have improved drastically. If Real Madrid are to win, Kaka needs to be at his best. Up until now, Mesut Ozil has been sharing the play making responsibilities, but the time has come for Kaka to show if he can influence games as he once did in AC Milan.

This week's match will also give Mourinho time to experiment with his tactics. It is expected that Real Sociedad will use a 4-3-3 formation, putting an extra player in front of their defense to congest the middle of the field. Given this possibility and the absence of our right wingers, Jose Mourinho might also decide to use a 4-3-3 formation as shown below. 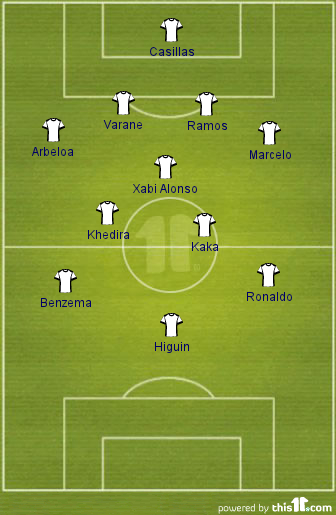 The inclusion of Khedira beside Kaka will give the Brazillian some space to work his magic while Xabi Alonso can send long passes coming from the deep end. In addition, this starting line up will be fairly flexible as Benzema can be replaced later on in the match to bring on Sahin or Granero, allowing for the formation to change back to a 4-2-3-1. Kaka would then move to the left wing, Ronaldo to the right, and Khedira can be shifted back a bit.

No matter what the formation or starting eleven, the players will have to use the rage from Tuesday's match to get back to their winning ways.

What do you think, madridistas? Are the suspensions useful? Would such a formation work against Real Sociedad?

Please remember to like Managing Madrid on Facebook and continue following the conversation on Twitter @managingmadrid. Also, be on the lookout for the Managing Madrid podcast which is available on iTunes.