Real Madrid At Atlético de Madrid Tactical Preview: Pepe and Ramos Are Back Together

Share All sharing options for: Real Madrid At Atlético de Madrid Tactical Preview: Pepe and Ramos Are Back Together

Some football analysts believe the word "tactics" must be used only when speaking about midfielders and strikers, as if the defenders didn't have anything to do with how the team plays offensively. Pepe and Sergio Ramos are arguably the best pair of centerbacks in the world (I challenge you to name another one). These two men haven't enjoyed many games together after the draw in Villarreal. When Ramos was healthy, Pepe was suspended, and when the Portuguese defender was cleared to play, Ramos had to miss the game against Valencia because of the yellow card he saw against Osasuna.

You've probably heard my theory about not moving Ramos to the rightback position again. These two centerbacks allow Real Madrid to have its defensive line in the midfield. Pepe is probably the fastest man on the team (maybe Di María and Cristiano would be close), and Ramos's physical power has no match on any European team. This is why Real Madrid doesn't suffer with through balls even though the defenders are that much ahead on the pitch. Sami Khedira is now able to help offensively a little bit more than what he did last year, when Carvalho was Pepe's partner in the centerback position. It's almost impossible to precisely describe how important Pepe and Ramos are to Real Madrid's season this year, but in this tactical post I'll try to break it down.

Jose Mourinho's Real Madrid plays with a 4-2-3-1 system, right? Wrong. Yes, that 4-2-3-1 formation is how the team is on the field as soon as the referee kicks the game off. But when Real Madrid is starting to dominate against most of the teams, the players appear to be in a 3-3-4. When the team is playing against lesser teams that prefer to go to the counterattack instead of having most of the possession--even the centerbacks try to create numerical mismatches by supporting Alonso and Khedira.

Sergio Ramos is usually the centerback that supports the midfielders the most, with Pepe's quickness saved to defend the other team's through ball. 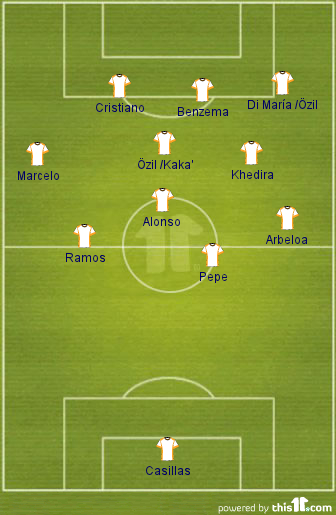 As you can see in the image on the right, Real Madrid risks a lot defensively playing that way. Ramos and Pepe (maybe Puyol) are the only two centerbacks in the world that would allow Real Madrid to play with this attitude and formation.

Does anybody still believe Cristiano Ronaldo plays in the left wing just like Özil and Di María play on the right? That's a misunderstanding. Yes, when the team is defending, Cristiano usually takes the left-winger role. But when Real Madrid's positional attack is established, the Portuguese moves alongside Benzema to leave the left-winger space for Marcelo (who isn't playing that pure of a left back, of course).

This "perfect storm" system is only modified when two things happen:

When Higuaín starts instead of the pure right winger (this player does actually play in the right flank), that moves Benzema to this space so Higuaín can be at Cristiano Ronaldo's side.

Benzema is a magnificent player who knows how to read a game, but his role in the right wing is not proper for him. These players on the right need to open up the space in the center of the attack so Cristiano Ronaldo, the other striker and especially Özil or Kaka' are able to receive the ball comfortably. Benzema's tendency moves him inside, and that's why the team usually doesn't shine as much when Benzema and Higuaín play together.

With one exception. In these last few games, Cristiano Ronaldo has been moved to the left wing to open up this space, with Özil being a little bit more of a second striker. Take a look at Real Madrid's game at Osasuna's stadium. Cristiano Ronaldo was much more of a left-winger than a striker.

Even though Varane has looked great so far, he is not Ramos or Pepe physically (yet). That means that whenever him or Albiol play, Marcelo needs to help a little bit more defensively rather than going ahead to support the midfielders and the strikers.

But there has been a very important modification within this system. At the beginning of the season, Xabi Alonso was in the defensive line whenever Real Madrid's statical attack was going on. Arbeloa then went ahead to support Khedira and Marcelo. This meant that there was much more space in the middle of the field, because Arbeloa was in the wing forcing the defenders to cover up the space in the flanks.

With Di María's likely return to the starting lineup, and Pepe and Ramos able to play together once again, Real Madrid will surely try to get this 3-3-1-3 formation going once again. Unless Atlético shows real commitment to fight for the possession and the team perceives real danger that even Ramos and Pepe are able to stop every time Simeone's team tries to go to the counterattack.