Bayern Munich played FSV Mainz on Saturday in what turned out to be goal-less stalemate. For a team that is 12th in the Bundesliga Standings, Mainz did a very well job neutralizing Bayern's attacks. Although Bayern were resting key players such as Ribery, Lahm, and Gomez, they still looked relatively quiet. Not surprisingly, most of their attack went through Schweinsteiger who resembles Xabi Alonso in the way that he controls the game. Both players are the "rate-limiting" factors in their respective teams; stop them and the team will suffer. Khedira will surely mark Schweinsteiger and the team will most likely press high as they did against Barcelona in the Copa del Ray second leg. This Bayern side are no pushovers though, they have many strengths and could also pressure Madrid.

Mourinho will have to choose his fullbacks wisely as Bayern's wingers, Ribbery and Robben, are skilled, fast, and love to cut inside. They also push their fullbacks forward often exposing their defense. In fact what I have noticed most from the match against Olympic Marseille and FSV Mainz is that their defense looks too open at times with the centre backs drifting out of position. WIth respect to attacking football, given their height advantage and the weak aerial abilities of the Real Madrid's defence it is expected that the biggest threat on Casillas' goal tomorrow will come from crosses into the box.

Mourinho has already picked his line-up for tomorrow, but gave no signs of who among Ozil, Di Maria, and Kaka will start. Given the strengths and weaknesses of Bayern Munich I'm going to go on a hunch and pick an unlikely line-up of Casillas, Ramos, Pepe, Varane, Coentrao, Khedira, Alonso, Ozil, Kaka, Benzema, and Ronaldo. 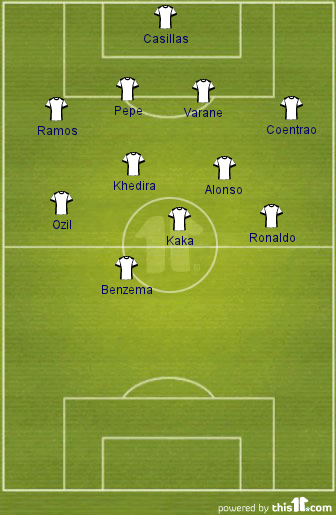 Coentrao and Varane offer much more defensively than Marcelo and Arbeloa while Ramos can help in counter attacks better than Arbeloa ever could. Despite both teams' strengths on the wing, this game will be won in the midfield, which is why I think Mourinho should start Kaka alongside Ozil.

Both teams have their weaknesses, but based on recent performances Real Madrid go into the match as favourites despite being the visitors. It will surely be a heated contest, lets hope it lives up to the expectations.

What do you guys think of this line-up? Feel free to tell me how wrong or right I am in the comments section.