As part of our El Clasico coverage, we want to bring you the best tactical analysis you've ever seen! Guardiola and Mourinho have already started their mind games, but they are yet to show any signs of their tactically choices which means we have two days to rip hairs out trying to figure out possible line-ups and a solution to our "Barca problem". I'll tackle Barcelona's 4-3-3 formation with Madrid's possible responses and Dennis will cover the 3-4-3 formation in the next piece.

In a way, the recent Barcelona vs. Real Madrid battles remind of the Brazil vs. France matches in the 1998 and 2006 World Cups. Despite the presence of superstars in Brazil's line-up, especially in attack, France completely out-classed them in midfield (a Madrid legend comes to mind). Am I saying that Barcelona beat our midfield? Yes, unfortunately. Do we have the better offensive line? With 107 goals in La Liga alone, you can bet on it! Will our strikers' strength be able to win against the mighty Barca? Not likely. Beating Barcelona will require something special from the midfield and defense. Join me after the break to see a tactical breakdown of how to beat Messi and company.

Jose Mourinho is expected to close the middle of the field in order to stop Messi's runs and challenge Barcelona for possession. Given this fact and Barca's recent game play, I see a change in personnel from the last clasico. Guardiola seems to have been a step ahead with the introduction of Tello and Cuenca. These two wingers can help utilize the width and are fast enough to give Arbeloa and Marcelo some problems. Assuming the inclusion of Cuenca (the more likely of the two), Messi would be moved to the centre of the offensive line and Alexis would take his place on the left wing. Luckily for Madrid, Cesc Fabregas has been poor lately, and is not expected to start on Saturday given his bad performance against Chelsea. Iniesta has also been ineffective in the LW position recently and is expected to move to the midfield to partner up with Busquets and Xavi. This means that with Messi's inclusion closer to the centre of the field Madrid would have a very hard time controlling the midfield.

The question is how do you mark Cuenca (or Pedro) on the right wing while also marking Messi at the centre and fighting for possession at the same time? To be completely honest, I don't exactly know, the more I think about it the more depressed I get. But there is hope!!

Barcelona's left wing is quite vulnerable in the absence of Abidal. Unlike the game against Bayern Munich, Real Madrid can afford to focus less on their right wing and Angel Di Maria's inclusion is not necessary (sorry Gabe and Jared!), especially since he gives away possession way too much. Real Madrid can therefore either start Kaka in a 4-2-3-1 formation or bring on Granero and play in a 4-3-3 system.

Kaka has been rested for the past two games now and has recently shown a lot of effort in chasing the ball. I expect Mourinho to start him in the middle of the field, pushing Ozil to the right. Ozil has shown to be more effective when he has not been marked by Sergio Busquets where as Kaka has the one on one skills required to get by the Catalan. In addition, Kaka has the passing and work ethic required to retain possession and track back. His tendency to run to the left wing also gives Ronaldo the option to run inside and gives the two an opportunity to double up on Dani Alves. Strengthening the attacking half of the left wing also means that Marcelo's inclusion is not necessary (although it would definitely help Ronaldo), giving Mourinho the chance to choose the more defensive Coentrao. 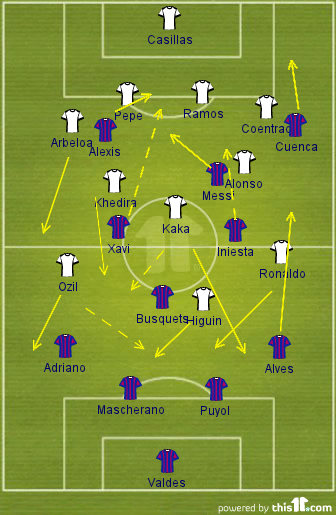 On the other hand, Madrid can start Granero alongside Khedira and Alonso, push Benzema to the right wing and play in a 4-3-3 formation themselves. Seeing how Barcelona will be out to attack, this formation gives Los Blancos an extra man in defence and forces Barcelona to make more use of their left wing where they lack strength. However, I for one do not see Mourinho using such a line-up for various reasons. Benzema played almost the entire match on Tuesday and should not start ahead of Higuin for this match. In addition, this system require Ozil to get past Busquets which I see highly unlikely. Also, why would give up on the best attacking force in Europe for a second-rate defensive system? 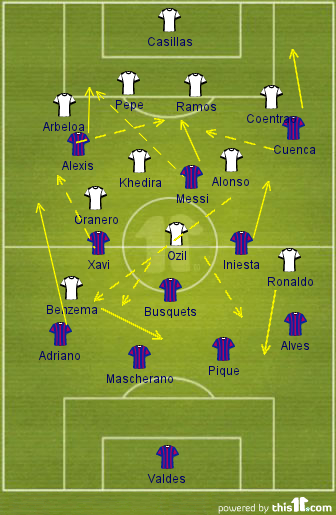 For the first time in recent history, the pressure is on Barcelona. Hopefully, Jose Mourninho does not decide to play defensively because Real Madrid is simply much better in attack. I foresee Madrid starting with 4-2-3-1 formation and pressing high. In the second half, Mourinho can introduce Angel Di Maria, Benzema and Granero in place of Kaka, Ozil, and Higuin and switch to a 4-3-3 formation if things are going well.

Let me know what you think of the formations and tactics. Do you think Mourinho will outclass Guardiola or will it be the other way around?

Stayed tuned for Part 2 of our tactical analysis and an in depth breakdown of Barcelona's 3-4-3 formation!