After this thrilling, heart-breaking International break, Real Madrid is back to the grind. The team held its first training session with the International players since the game against Granada, and it seems that they all want to give Cristiano Ronaldo the support he needs.

Real Madrid's star publicly said that he didn't celebrate his two goals against Granada because he was sad. The Spanish media then started to speculate about Ronaldo leaving. Arbeloa, Khedira and Benzema showed him their full support these last two weeks, but today Xabi Alonso, Captain Iker Casillas and Arbeloa chatted with the press.

What we live inside the dressing room is different from what journalists want to sell outside. I don't think he has changed, I think he's normal now. I would be happy to see him or any other teammate getting the Ballon D'Or.

Later on, Arbeloa showed once again why he could be a very good captain of Real Madrid. He has publicly backed up Cristiano Ronaldo three or four times in this International break. And today, he demonstrated once again why madridistas should want him on the team. He's not only a good right back, but also has a very deep sense of what the team needs.

It was occasional, I see his usual smile. His season was amazing, he deserves to win it (the Ballon D'Or). If I had to vote, I would pick Cristiano Ronaldo, then Messi and with my latest vote Sergio Ramos. I'm sure the crowd's reaction it's going to be fantastic, they will cheer for him more than ever.

But he also decided to give his teammate a hand when he was interviewed by Spanish radio station COPE.

I heard one journalist say "Who is Arbeloa to talk about Cristiano Ronaldo?" Well, I'm his teammate. He's a very important player and he will have all the support from Real Madrid because we're a family.

And then, it was Iker Casillas' turn. The captain was quiet about this issue for the International break, but put his support behind Ronaldo.

It's a privilege for Real Madrid to have a player like Cristiano Ronaldo on the roster. He's happy to stay in Madrid. 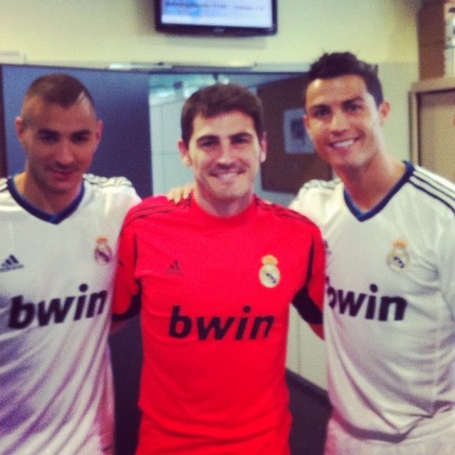 We're set to the team's official picture. The only one sad here is Benzema...

So it seems that the team will be fully concentrated on these two tough matches ahead. Real Madrid plays at Sevilla this Saturday and Tuesday Manchester City will come to town. The players better be prepared...

Stay tuned to Managing Madrid on Facebook and Twitter. We have massive changes coming up to the site, but we'll continue to provide Managing Madrid's trademark in-depth coverage of the games against Sevilla and Manchester City.