Cristiano Ronaldo has been rumored to be looking for a way out of the club for some time now. Whether or not that is true, we take a look at who could possibly replace the Portuguese star at the Santiago Bernabeu.

If recent reports are to be believed, Real Madrid’s golden boy Cristiano Ronaldo is set to reject any contract extension presented to him by the club. The reason for Ronaldo’s reluctance to sign an extension is unclear. But what is clear is that Madrid should prepare for the possibility of their star player leaving in the summer.

There are two possible candidates who in my opinion could provide a more than suitable replacement for Ronaldo. The two individuals in question being Neymar of Santos and Gareth Bale of Tottenham Hotspur.

When watching Neymar on the ball, I can’t help but think it is stuck to his feet. The young Brazilian has an exceptional dribbling ability, amazing technique and is a clinical finisher. He usually plays as a striker for both club and country occasionally playing on the wing.

The Brazilian team has always been known as a country that produces some of the finest attacking players the world has ever seen. Ronaldo, Ronaldinho, Kaka... and the list goes on. I firmly believe that Neymar will soon join such an illustrious list of footballing greats and cement his name down as one of the greatest players to have ever played the beautiful game.

It has been reported in Spain that if Bale is to leave Spurs in search of major trophies he would join Real. Bale continues to impress and show that he is capable of producing the goods that are required of a player in white. A few years back he showed that he could make mince meat of one of the best right backs in the world, Maicon.

People could argue that Bale would be better fit to play on the left but I think he could be used to great effect on the right hand side as well. Bale can use his pace to dribble passed defending players down the flanks and either cut inside and pass or go for glory.

Undoubtedly one of the best attacking players at the moment, Colombian Radamel Falcao, is a goal scoring machine. The forward is as close to a complete player as they come. He can score with both feet, his head and can hold onto the ball extremely well under pressure. Falcao has scored over 100 goals for both FC Porto and Atlético Madrid during his brief stint in Europe. A perfect example of his goal scoring exploits came on matchday 15, when Atleti faced off against Deportivo La Coruña. Deportivo’s keeper Dani Aranzubia was utterly helpless and could not stop Falcao putting 5 goals passed him.

At Real, Falcao would find himself playing in a club full of world class stars who are likely to provide him with countless opportunities on goal. He may not be a direct replacement for Ronaldo on the wing, but through the centre he is one of the only players who could possibly challenge Lionel Messi for scoring the most goals in a calendar year.

The saying money talks is true. It would be a major factor in these deals as vast sums of money would have to be forked out for the trio. These three world class purchases can be seen to many as a lavish spending spree, but considering the money Madrid could get from selling Ronaldo, these deals could yet be made possible. Ronaldo should fetch a cool 100-120 million pounds from any potential sale. Bale and Neymar both have buy out clauses in the region of 50 million pounds. So essentially all Madrid would have to do is shell out 60 million pounds and persuade a hesitant rival to let go of their star man, Falcao.

As a Real supporter myself, I would love to see Ronaldo remain in the capital of Spain. I see him as a player of exceptional quality with the ability to do anything with the ball. In his element he is unstoppable and if Ronaldo chooses to stay in Spain for the foreseeable future, he will most likely cement his place in Real Madrid folklore in becoming the best player we have ever had.

In a recent press conference, Ronaldo made it known that he is now feeling loved and happier than he was compared to just a few months ago. "Right now I'm feeling more comfortable with the fans, not just at the Bernabeu, where I've always felt good, but outside too. They have shown me a lot of love. I want to pay them back in the best way possible, which is playing well and giving my all for the shirt and helping Madrid get to the top."

Whether or not Ronaldo decides to stay in Madrid, the club should look to purchase these three players in the summer. These additions would without a shadow of a doubt add quality to an already star studded Madrid line-up. Real Madrid would again have a team full of Galacticos, players who would walk into any team and command respect from the start. With such a young and talented squad, Real could possibly end Barcelona's dominance and once again begin theirs for the foreseeable future.

A possible line-up without Ronaldo 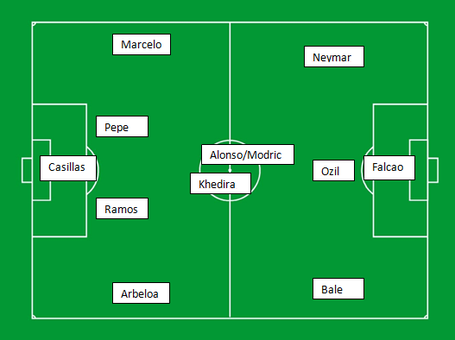 A possible line-up with the new additions including Ronaldo 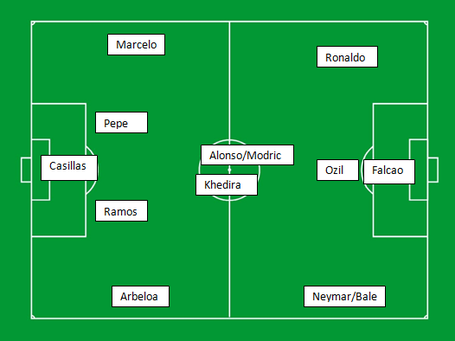