Real Madrid Get Outnumbered In The Middle

Share All sharing options for: Real Madrid Get Outnumbered In The Middle

Juventus changed from their normal shape for this game. I think this change was very successful. At times Juventus had 6 players in central areas and wide options on both sides. Juventus made the game very tight in the middle. Real Madrid did not do the same. Juventus was much more compact. The flexible movement of all these technically gifted players was troubling. Mainly because Juventus was much more compact and had numerical advantages in midfield zones. Real Madrid's shape was taken advantage of. 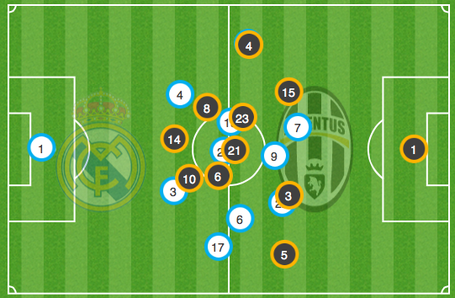 Every player on Juventus was passing and moving well. A complete team performance. Juventus players found space very well all over the field. Real Madrid made it easier for them by not being compact enough. It was too easy for Juventus players to venture into half spaces and find 5 yards of open space. This was similar to the regular Juventus shape but instead of a third centre back there is one more midfield player. Making a very effective overload in this area of the pitch. Meaning when they had the ball they always had options in this important area to build forward moves. This continued after the sending off but to a lesser extent. A strong and compact base of 3-6 players depending on the situation provided Juventus with good options to play forward.