It was a boring game, a good atmosphere and a terrible pitch.

Share All sharing options for: A Night In Xàtiva: A Story Of Real's 0-0 Draw

Below is my personal experience in Xàtiva's field La Turma during Real's 0-0 draw against Olímpic.

Xàtiva is just a 45-minute drive away from Valencia, the city where I live. I know that these Copa del Rey matches are hard to swallow, but I made my mind up and asked Olímpic for press credentials. Luckily enough, they still had some to give away, so I left the house at 19:30 CET in order to find a good place to park the car.

I had never been to Xàtiva, although it is quite a famous town in our region. Its castle is impressive, and you can see it from the road, dominating the mountains, as soon as you're entering the town. My GPS got me to La Turma just fine, but I couldn't find a place to park the car, so i had to drive through the town a little bit before finding a proper spot. It was easy to head back to the stadium after I made sure I had all I needed in my pockets -including a scarf and a winter hat-.

It was chaotic there, as Real Madrid's bus was arriving and the fans were waiting for them to come out. I tried to explain to the security people that I still had to pick up my press credential, and they made me wait in line with all the fans. Then, inside the stadium, I had to get out again in order to enter the field through another door.

They didn't have a special place for the reporters to sit. We all had to stay close to the fans -that's not a problem, it's just weird- and we had no plugs around to connect our laptops, so it was a pretty poor coverage from that standpoint. 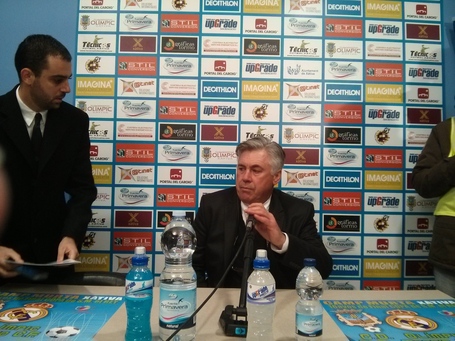 The fans were really passionate and the turf was just terrible. We all know it is great for the fans of these small clubs to play against Real Madrid. Olímpic's players will remember this game forever, but it is a shame to play such a professional competition in that kind of AstroTurf. The ball couldn't stop bouncing.

Morata played quite terribly -more on that in future posts-, but so did the whole Real Madrid squad.

After the game ended, the reporters had to step on the pitch before entering the press room. There was room for just 30 people there, so the radio guys -Burgos, Meana and so on- had to stay on their feet. I luckily had the chance to ask Carlo Ancelotti (02:14 in the following audio) about the pitch.

He answered that, while it's true that his players aren't used to the AstroTurf, he was quite happy with the team's performance. You can find the rest of his press conference in Marco's report.

After that concluded, me and the rest of my fellow journalists got back to the pitch to find Jesé addressing the media. We also had the chance to ask him a few things. I chose to ask him about his favorite position -right or left wing-. He went the easy road and said that he's happy wherever his coach plays him -01:18-. 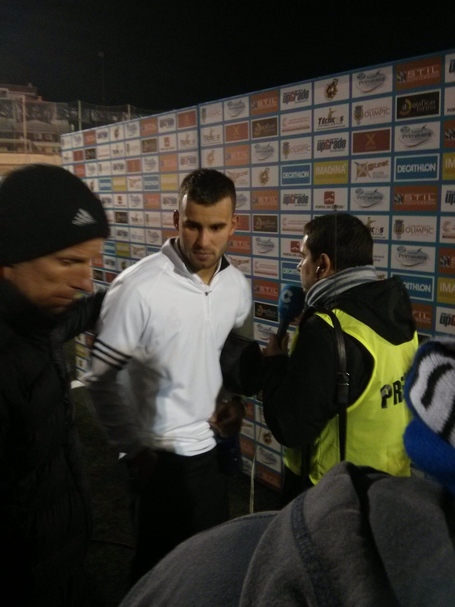 After that, I got back to the car and drove home.

It was a poor game by Real Madrid. But it was a fun night overall.