Mourinho's team displayed a beautiful tactical work against Barcelona in Real Madrid's 1-3 win at the Camp Nou. First of all, the Portuguese coach used Di María's workrate to provide yet another defender to his team. Di María played as the team's right back without the ball, and that allowed Arbeloa to track Iniesta down and prevent him from damaging los blancos. But that's just one of the adjustments Mourinho made.

Khedira and Alonso worked on Xavi perfectly, and when Messi felt like he was needed and dropped back to create some opportunities, both Real Madrid midfielders prevented him from turning to face Real Madrid's goal. With that tactical plan, Varane and Ramos were very comfortable, but they still completed a good defensive performance when needed. 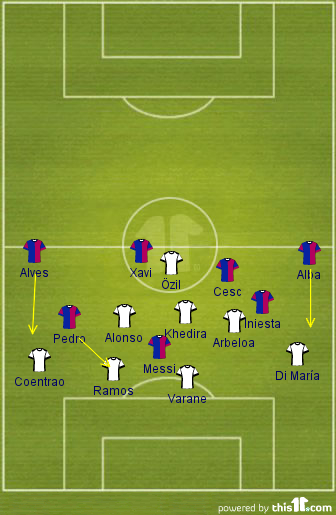 But one man stood up from his teammates in Real Madrid's defensive line, and that's Fàbio Coentrao. He was left alone in Real Madrid's left back during the whole first half, having to defend Alves and Pedro both. Cristiano Ronaldo never helped him much (since he was supposed to take profit from Alves' offensive runs), but Coentrao was enough to stop two Barcelona men in that wing. On the second half, Mourinho decided to put Cristiano Ronaldo on Özil's place to give some more help to his left back, and Özil sacrificed himself defensively and helped his teammate a lot.

Real Madrid have only lost one out of the last seven Clásicos played, and that proves Mourinho is the ultimate tactical master. He has the key to stop Barcelona, but the players still need to execute his plan to perfection as they did in the second lef of the Copa del Rey tie. Mourinho has shown AC Milan how the Italian team should try to stop Barcelona. It won't be an easy task for them, but the plan is there for the taking.