Alex Ferguson's surprise line-up left Mourinho without any answers for a large part of the game. However, it was Mourinho who finished on top as his superior tactical adaptability and substitutions won Real Madrid the game.

Yesterday’s match between Real Madrid and Manchester United displayed the importance of tactics in the modern game. Despite the presence of numerous stars on the pitch, the game was more about team work and following a game plan than individual performances. Sir Alex Ferguson had surprised everyone with his team’s set up and Mourinho seemed to have no answers for a large part of the game.

Having been outshot in the Bernabeu, Ferguson made several changes to his starting line-up to prevent Madrid from attacking which proved to be largely effective. Real Madrid started with the usual formation of 4-2-3-1 with Angel Di Maria and Cristiano Ronaldo on the wings and Higuain as the central striker. On the other Manchester United were set up in a 4-4-1-1 formation with Michael Carrick dropping into the defense when needed and Welbeck shifting back into midfield when Madrid were on the ball which made them look like a 5-4-1 at times.

From the get go, it appeared that the terrible pitch conditions at Old Trafford were affecting the Real Madrid players. Xabi Alonso was the first to adapt, choosing to make more aerial passes than short ground passes. Cristiano Ronaldo also slowed down after the first couple of minutes to avoid getting injured and losing possession.

The slowed pace of these players played right into United’s plan. The Manchester players were clearly instructed to clog their right side of the pitch where Ronaldo and Xabi Alonso usually play. Rafael, Ferdinand, Giggs, Carrick, Welbeck and sometimes even Van Persie surrounded Ronaldo and Coentrao making it impossible for Ronaldo to make surging runs. More importantly, the crowding of that area of midfield blocked the passing channels available to Xabi Alonso. In addition, Danny Welbeck was constantly pressuring Alonso and nullified his ability to make his long diagonal passes, forcing him to make square passes instead. This caused Madrid’s possession to be focused around the central midfield with Khedira having more time on the ball than other player, but Ozil and Di Maria not having enough time to penetrate the 2 defensive walls put up by Manchester United. 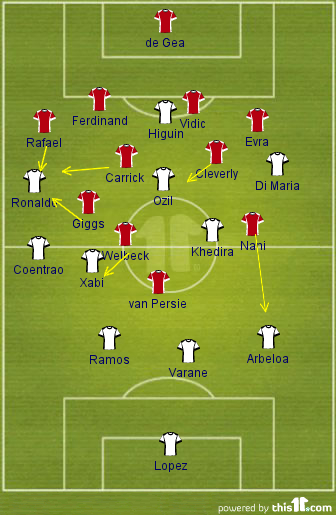 Knowing that Real Madrid had to score, United chose to invite Madrid’s attacking players to come get the ball whenever they regained possession. However, as soon as Higuain, Di Maria, and Ronaldo tried to pressure their defense, they made triangular passes to tire out the players, with the ball eventually going back to the centre backs to launch it forward for a counter attack using the pace of Nani, Welbeck and Van Persie. Sir Alex had clearly outsmarted Mourinho with his starting line-up and even the introduction of Kaka did not change the flow of the game much. The second half started much the same, but Real Madrid became livelier after going one goal behind.

There was more urgency now and Mourinho had to put all his cards on the table. Arbeloa and Coentrao took turns pressing high up the field to stretch the play. However, the most important factor in of Madrid’s improved play was Higuain’s movement to right wing to draw players. Together with the presence of Arbeloa, this freed up some space for Ozil. On the other side, Kaka, Ronaldo and Coentrao made overlapping runs to stretch the United defense. It was clear that Madrid were going for it; Varane and Ramos were now playing close to the half line. Crosses started coming in from the sides and Real Madrid now looked more dangerous than ever. However, Manchester United were still defending superbly and it was just too hard to break through their defense. That was until Nani was controversially sent off. 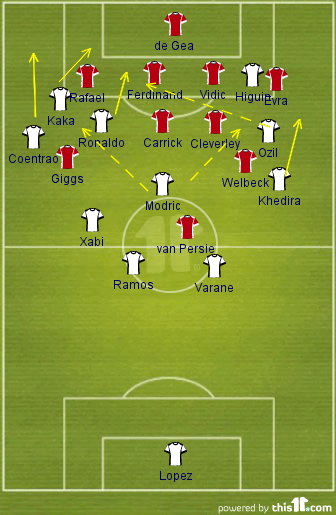 At this point in the game, Mourinho outplayed Ferguson. He immediately sent on Modric who became the centre of Madrid’s movements. He was doing it all, dictating the play, dribbling past players, taking shots, making much needed vertical passes and creating space for Alonso and Ozil to send in long balls.

Ferguson did not react quickly enough to this change; his players just did not seem to be ready for containing Modric. While part of that was due to being a man down, it was also because Madrid now had too many midfielders and United had one too many strikers. One can argue that at this point Robin Van Persie should have been taken off for an extra man in midfield such as Valencia to provide cover, but Ferguson was too resilient with his changes until it was too late. Modric was able to take advantage of the space to equalize and Madrid quickly forced a second within 3 minutes.

At the end of the day, it seems that Mourinho is right to say the best team lost, because apart from Diego Lopez and Higuain, the players were not clicking the way they had against Barcelona. Perhaps it was due to the unfamiliarity with United's set up or perhaps they were too intimidated by the occasion and the crowd at Old Trafford. Whatever it was, Mourinho's superior adaptability as a coach, with the help of the red card and sensational saves by Lopez is what sent los blancos through to the quarter finals.