Los Blancos returned to training on Wednesday at UCLA. After rather passively observing prior practices, new manager Carlo Ancelotti made his voice heard today throughout Madrid's morning training session.

Real Madrid increased the intensity and tempo in Wednesday's training session. After the squad jogged and stretched as a unit, Ancelotti quickly moved to an 11 v 11 passing exercise with four small goals. With Los Blancos starting to ramp up their preseason training, Ancelotti's men participated in more match-simulation type of drills. 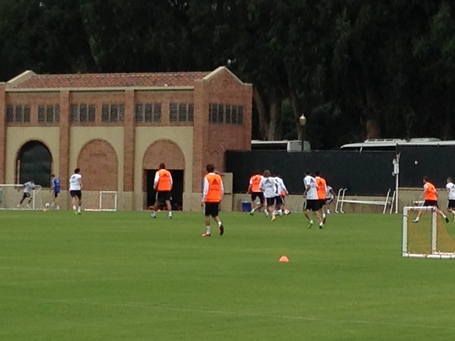 After the 11 v 11 exercise, Ancelotti divided the squad into two offensive and two defensive units. The drill was designed to work on attacking play and passing movement in the final third, as the offensive unit tried to score on goal and the defenders attempting to regain possession or make a clearance.

While the majority of the squad participated in training, Varane worked by himself on the side as Illarra started running today. Stay tuned to Managing Madrid for more breaking news and analysis LIVE from Los Angeles.