Carlo Ancelotti has introduced some changes to Real Madrid's system. He has given Cristiano Ronaldo more freedom and has developed a three-man midfield.

Carlo Ancelotti wants Real Madrid to bring the tempo down. While Mourinho wanted the team to have really quick transitions from defense to offense, the Italian coach wants to control the game much more effectively by having the possession. And that's why Real Madrid signed Isco Alarcón.

The team now has a very crowded midfield. There were thoughts about how Isco would fit in Ancelotti's system, but the Italian coach has shown he wants Isco to play in the midfield. Ancelotti likes to play with three midfielders, all of them having the ability to distribute the ball. One of them has to take care of the defensive work, though, and that's where Alonso, Illarramendi and Khedira will come into play. Khedira tends to go forward when possible, but he's been playing in a much more defensive-minded role under Ancelotti during the whole preseason. It's still unknown whether the German player will return to the box-to-box role when Illarra and Alonso recover, but he will probably have a hard time playing there if Isco, Modric and Casemiro perform as well as they've been doing it in the preseason, because even though Khedira is a great player, he's not as polished as those three, and Ancelotti is trying to develop his new tactical system with two playmakers in front of the defensive midfielder.

Ancelotti was expected to try the 4-3-2-1 formation, but Mesut Özil found himself on the right wing most of the time. Özil will have to take the time to adapt to that position, because Carletto apparently wants to play Cristiano Ronaldo behind Karim Benzema. This could all change if Gareth Bale signs for Real Madrid, since Ancelotti could then try to implement the 4-3-1-2 formation with Ronaldo and Bale upfront. He could even try that with Benzema, but to play with Modric, Isco and Özil so close to each other might not be a good idea. 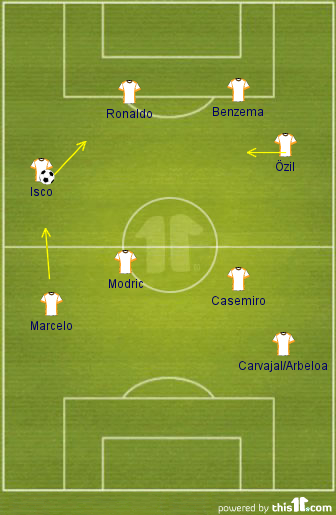 Since Özil and Isco -the player that tends to be on Real's left wing- like to drift diagonally to the center, Marcelo and Carvajal/Arbeloa will have to go forward a lot to prevent the opposition's fullbacks from helping in the middle. The center of the pitch is so crowded that Ancelotti feels the need create space with Özil on the right. And that's also why the fullbacks are so important. Özil is not a winger, and he wants the ball. He's not suited to create space for his teammates. Still, Özil might adapt to that position, he could be close to the goal and even dish more assists to Benzema and Cristiano.

That is a very strange 4-3-3, since Isco is trying to get involved with the offensive line much more than the other two midfielders. Illarramendi's recovery could change this scenario, but not a lot. He's a very similar player to Casemiro in terms of role. Illarra likes to go forward as well, and he's not as polished as Alonso tactically-speaking.

Still, Ancelotti probably went after him to replace Alonso, so the Italian coach will probably work on him to convert him to a much more positional midfielder. Khedira would offer more defensive security, but he's not very suited to this system. Modric is a reliable defensive player, and even though he's small, he also works to dismantle counterattacks. He will likely take turns with Casemiro/Illarramendi in order to be a little bit more unpredictable for the opposition.

There are a lot of questions to be answered when Alonso and Illarra recover. Yes, Alonso has all the tools to be Ancelotti's favorite midfielder, but he's not well suited to play in this formation neither

Xabi Alonso and Sami Khedira were José Mourinho's favorite midfielders during his three years in Real Madrid, and right now, Ancelotti's system has nothing to do with Mourinho's. Carletto likes versatile midfielders that can go forward, pass the ball and defend at the same time. Alonso can't go forward anymore, even though that was his role in Anfield, and Sami Khedira is probably the weakest midfielder when it comes to passing. Both of them will likely have a hard time figuring out what to do to be an important part in Ancelloti's plans, but they are surely good enough to compete for a spot with Illarramendi, Isco, Modric and Casemiro.