Injury-ravaged Real Madrid face off against newly-promoted but razor-sharp Villarreal in the fourth round of fixtures. Both sides have racked up a perfect record thus far, but that ends here for one team. New €100m man (if you believe the English press) Gareth Bale is set to make his debut in this thrilling encounter that comes after a series of crushing injury blows for the visitors over the international break.

Real Madrid travel to the southeastern coast of Spain to take on Villarreal at El Madrigal in the fourth round of fixtures. The hosts may be newly promoted after their shock relegation in the 2011-12 season, but El Submarino Amarillo is no slouch. Having signed intelligently as well as retaining key players such as Cani, Bruno Soriano and Mateo Musacchio, the club made a blistering start to the season, taking maximum points from Almería, Valladolid and Osasuna with, at times, breathtaking attacking interplay and some sensational goals. Los Blancos have failed to truly shine so far in the season, but have a similar record of three victories over much sterner opposition in Real Betis, Granada and Athletic Bilbao. For a more detailed look at Villarreal's side, see our Scouting Report.

Raphaël Varane trained on the field prior to the game but did so on his own as he continues to recover from knee surgery. The Frenchman will be unavailable for the game, as will Xabi Alonso, whose broken foot will keep him on the treatment table for a few months.

In addition to long-term injuries, the so-called "FIFA Virus" struck down a number of Madrid players during the international break this past week, spreading the squad very thin for the trip to Villarreal.

Marcelo, who broke his fifth metatarsal last season while on duty with the Seleção, had to be stretchered off during Brazil's friendly against Australia last week with a muscle injury in his left leg that will keep him out for 2-3 weeks. Fábio Coentrão then hobbled off the pitch in Portugal's friendly against Brazil with a minor muscle injury in the left thigh that rules him out of the Villarreal game at the weekend and the midweek tie against Galatasaray, leaving Madrid with no recognized left-backs.

To make matters worse, Álvaro Arbeloa, who has covered at left-back both at Liverpool and at Real Madrid in the past, has been ruled out of the game against Villarreal as well, having sustained a knock during Spain's friendly against Chile.

Los Blancos have been given a spot of good news, however, as both Cristiano Ronaldo and Isco are understood to be fit to play against Villarreal. The Portuguese forward had been struggling with a minor injury but despite a MRI prior to his country's World Cup qualifier against Northern Ireland revealing tendonitis in a thigh muscle injury, Ronaldo decided to play through the pain. His heroic efforts were not in vain as his hat-trick helped Portugal to a 4-2 win which keeps them one point behind Russia in Group F. Ronaldo pulled out of the subsequent friendly against Brazil in order to recover his fitness, and despite concern that he might not be able to play at the weekend, coach Carlo Ancelotti confirmed that his star man has recovered.

Isco's fitness was much more seriously in doubt, the midfielder having pulled out of the Spain squad with a right ankle injury sustained during a training session, but the 21-year old looks to make a surprise appearance against Villarreal after training with the team. Given Mesut Özil and Kaká's sales as well as the injuries in midfield, Madrid's squad looked particularly thin in attacking midfield had Isco been forced to withdraw.

Ancelotti will also be given a boost by the return to full fitness of summer signing Asier Illarramendi, who has recovered from the muscle problems that ruled him out of most of the pre-season and the first three fixtures of the Liga calendar. The elegant Basque midfielder is likely to make his debut for Los Vikingos against Villarreal, having impressed the manager in training, although he is unlikely to start.

It is the likely debut of another summer signing - possible world-record man Gareth Bale - that will draw the eyes of the world to El Madrigal this weekend. Bale looked quite sharp and incisive during a 33-minute cameo for Wales in their 3-0 qualifying loss to Serbia in Cardiff. Having played only 45 minutes in pre-season for Tottenham, Bale is a bit short of match fitness, with Wales manager Chris Coleman claiming that his star man is "nowhere near ready for 90 minutes."

Although there was speculation that given Madrid's left-back crisis, Bale might start at left-back for the Spanish giants, Ancelotti confirmed in a press conference that Bale will "almost certainly play on the right," and will definitely play against Villarreal, although the coach has yet to decide whether it will be "from the start or in the second half." Ancelotti also indicated that he would play Nacho, who received his first senior Spain cap against Chile, on the left side of defense.

Assuming the injury news remains the same, Madrid will likely line up in something approximating a 4-3-3. Khedira will tuck in to shield the back four in defense and will likely play as the deepest of the midfield three, while Modrić will likely surge forward from deep positions, seeking to build attacks and penetrate Villarreal's weak defense. Ronaldo, Benzema and di María will fill out a fairly standard attacking trident for Madrid.

Expect to see Gareth Bale most likely in the second half coming in on the right, either as a straight swap for di María or, if Isco is tiring given his recent injury, perhaps Modrić will shift to a more advanced role and the Argentine will slide over into midfield. A more likely substitution in that area would be Illarramendi for either Khedira or Modrić, with the busy Basque offering a different but no less secure approach to the holding midfield position, more sprayed passes than physicality and driving direct runs. 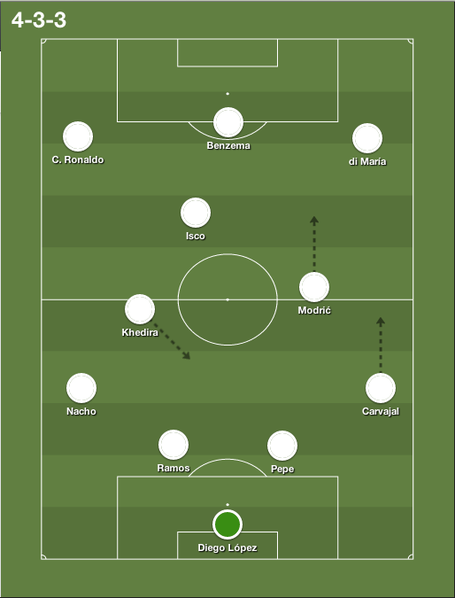