Illarramendi started his first game for Real Madrid, but the team's midfield still lacked the defensive balance needed against a good counterattacking team like Villarreal. Illarra played well but the team was not solid enough.

Real Madrid's defensive woes are not related to the team's defensive line but to the midfielders. While it's true that if you have the best defenders in the world they can make up for the midfielders' mistakes, Carvajal, Ramos, Pepe, Nacho and Diego López don't have the help from their teammates.

It seems that Ancelotti's plan is to control the game much more effectively, but his Real Madrid is far from being capable of dominating games at will. Isco played as an attacking midfielder against Villarreal, while he was tracking back and defending a little bit more in the previous games played by Real Madrid. 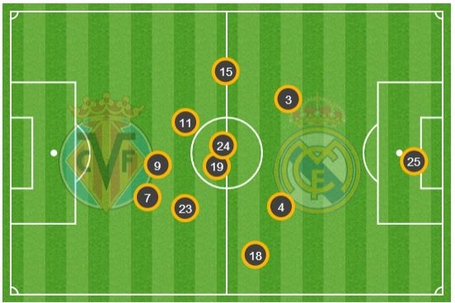 As you can see in this graphic showing Real Madrid's average positions, Isco played in the same spot than Gareth Bale -opposite wing though, obviously-. Gareth Bale helped Dani Carvajal in some plays, but he's not used to track back as much as Di María, and that's why it's surprising to see Isco so far from Modric and Illarramendi.

It's true that Nacho is a much more defensive-minded left back than Marcelo -that's because he's not a left back, basically-, and that could explain Isco's low workrate against Villarreal.

But if Real Madrid want to succeed at controling the tempo of the game and therefore not forcing Diego López to work that much in order to win points away from the Bernabéu, Illarramendi must play as the team's holding midfielder. Because that's what he is. If Modric ends up playing in that role, the team will lack defensive presence sooner rather than later, since Modric's defensive performance against Bilbao was so remarkable that it'd be a bad decision to rely solely on it.

Why not change Modric and Illarramendi's positions to have the Croatian player more oriented to the right wing and then also have Carvajal and Bale more involved in the game? It's clear that Real's stronger side is the left, but if Illarramendi plays defensive midfield and Modric plays on the right in that midfield three, Real Madrid would have a much balanced offensive line that wouldn't struggle as much.

El Madrigal has a very narrow pitch and it was really hard for Cristiano Ronaldo, Isco, Modric and Benzema to coexist in that left part of the field. That plan could work at the Bernabéu, but Ancelotti should aim for the defensive and offensive balance in order to succeed away, and he could get that if Illarramendi played as the team's true defensive midfielder.

Isco and Modric would still need to work a lot if that 4-3-3 formation is deployed away. Right now, it seems very hard to foresee this kind of midfield against top European times, and Ancelotti has probably realized that. And that's where Sami Khedira comes in. The German player needs to improve a lot with the ball on his feet, because his team needs his tactical awareness. Real Madrid probably have much more potential with Illarramendi, Isco and Modric, but at this point of time the team is better with Khedira in the lineup.