Real Madrid Vs Atlético Madrid, Liga 2013-2014: Analysis And View From the Press Seats

It's quite obvious that Ancelotti's team never managed to control and dominate the game. But why?

Share All sharing options for: Real Madrid Vs Atlético Madrid, Liga 2013-2014: Analysis And View From the Press Seats

Diego Pablo Simeone is a brilliant coach, simply put. The Argentinian coach put on a tactical show to allow his team to beat city rivals Real Madrid. We will show you later how he accomplished that, but it would be better to start this analysis with Simeone's thoughts about Atlético's defense on Real Madrid's wingers.

I personally had the opportunity to ask him that question, and here's what Simeone replied:

Question (Lucas Navarrete - Managing Madrid): I would like you to explain your defense on Real Madrid's wingers.

Answer (Cholo Simeone): We wanted them to attack through the wings because we thought that their biggest threat is on the middle when Isco and Di María go there because they always manage to find Ronaldo. But they had to give the ball back to their center backs because we were doing a good job in the middle with the strikers, and that allowed us to have their own center backs far away from our players when we recovered the ball. So we had the space whenever we were able to get the ball back.

Simeone's answer starts in 6:33 in the follwing video:

Now, we already knew that Atlético Madrid know how to defend wingers. They are a very strong defensive side in which every player works. Di María/Bale and Cristiano Ronaldo/Isco never created enough space for the players in the middle. If Ancelotti had tried to switch those positions in order to have Cristiano and Isco playing on their natural foot and Di María and Bale playing as pure wingers on the left, there would have been a lot more room to operate inthe center of the pitch. 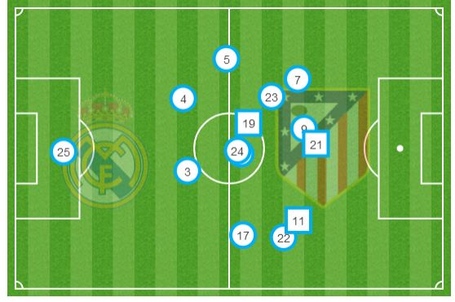 As you can see in this average position map, only Di María was trying to play as a pure winger -on the right though-. Since Bale came in, he tried to go to the center, and that was Cristiano Ronaldo ans Isco's tendency as well.

That might not be a problem against other teams, but Atlético Madrid definitely know how to defend, and therefore Ancelotti's men needed to create more space.

It should also be noted that Khedira and Illarramendi are almost in the same exact spot there. It would be better to have both of them covering more ground by having more space between them. That way, Atlético Madrid would not have as many counterattacking chances as they had.

Again, if Real Madrid are to play with this 4-4-2 formation again, Benzema and Cristiano Ronaldo should also try to have more space between them. The French striker should try to support Real Madrid's right wing a lot more to make Atlético's job much harder.

It will be interesting to see what Ancelotti has in mind for the upcoming games. He should be trying to improve this system in the next three matches to have a much better and cohesive team against Juventus and FC Barcelona.