It might not be easy for Gareth Bale to adapt to the Spanish football, but Ancelotti could have some ideas to fit Bale in his system.

In case you don't know, Gareth Bale is not a pure winger anymore. While he started his career as a left back and then moved forward and play on the left wing under Harry Redknapp, André Villas-Boas gave him some more freedom and Bale started growing as a very complete player.

As you can see in this image, Bale has evolved quite a bit. He moved throughout the whole Tottenham Hotspurs' offensive line last season to create damage both with his ability to cross and shoot the ball. Kevin McCauley suggested that Bale could end up playing in Real Madrid's right wing, and with Mesut Özil's departure it seems pretty much obvious that the Welsh player will fit well in that position.

Why? Because he has a really powerful long-range shot. Even better than Cristiano Ronaldo's. Ronaldo has the power, but every Real Madrid fan knows that accuracy is not his best attribute -when shooting far from the goal-. And that's where Bale succeeds. If he has the chance to play in Real Madrid's right wing and the team keeps playing with the same system, Bale will have a lot of opportunities to prove his value as the world's greatest long-range shooter. 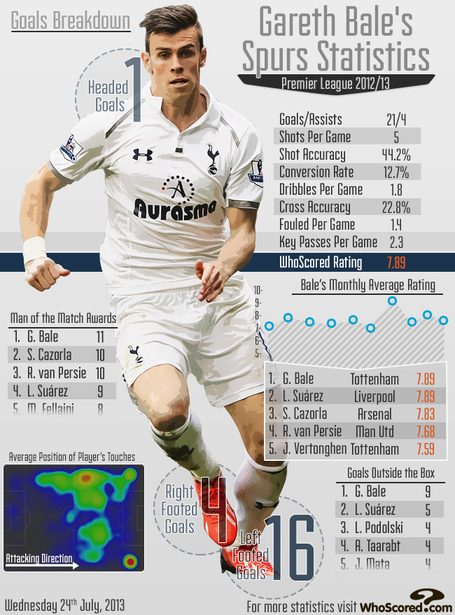 As you can see in the image on the right, Bale's numbers are quite good for a player that hasn't reached his peak yet. Under Real Madrid, with the defense also focused on Cristiano Ronaldo, Isco and Karim Benzema, Bale should be more comfortable.

And again, if he plays on Real's right wing, his shot accuracy should only get better. Bale's impressive 9 goals scored outside the box will certainly help a Real Madrid side that was depending too much on Cristiano Ronaldo's goals.

Bale is not as bad player against tight defensive lines as some analyst suggest. In fact, he had to score some goals while being the Spurs' only scoring threat. His assists numbers should improve quite a lot if he manages to find Cristiano Ronaldo and Benzema.

Plus, his early career as a left back means that Bale will help his team a lot if needed, as Cartilage Free Captain's Kevin McCauley pointed out in our Q&A.

If Karim Benzema gets hurt, Bale could also play in the false 9 position alongside Cristiano Ronaldo. Both players are so good playing counterattacks that Ancelotti could be tempted to use them in that position against teams like FC Barcelona or Bayern Munich, moving Isco to the offensive line and having a much-more stronger midfield with players like Khedira and Illarramendi.

Bale has not had a proper preseason, and that's why he might need some time before getting his groove. Furthermore, he will have to adapt to another country, another system and also other teammates. That's why Real Madrid fans should be patient about his contribution to the team. This player has been a great signing for the club and will start making his impact sooner rather than later.

To end this analysis, take a look at Gareth Bale's 31 goals during the past season in this video below: