The new stadium could be officially open during the year 2018.

Share All sharing options for: Real Madrid Unveil Plan and Design to Upgrade the Santiago Bernabéu

Real Madrid will spend close to 400M€ to upgrade the Santiago Bernabéu. Apparently, the club would want to increase the stadium's capacity a bit and also turn it into one of Madrid's emblematic places and the world's greatest stadium, according to Florentino Pérez.

The new Santiago Bernabéu has to represent modern architecture and also be one of Madrid's focal points.

GMP Architekten won the contest with their design. They also were in charge of rebuilding the new Olympic Stadium in Berlin, for example.

This stadium will have new places for leisure and will also represent a higher source of income via restaurants, a mall and also a hotel. It will be an icon of modern football.

The stadium will also have a retractable roof and a completely new 360º scoreboard.

This is GMP's design -screenshot via Real Madrid TV-. 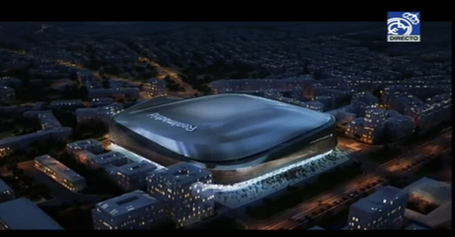 According to GMP Architekten, this will be the world's most advanced arena.

It remains to be seen whether companies like Coca-Cola or Microsoft -often rumored to be interested in sponsoring this new project- sign a deal with Real Madrid to name this new stadium. It should be noted that Santiago Bernabéu's name will not be removed.

This is definitely an impressive design and I'm looking forward to see this new Bernabéu live.