Why did Real Madrid struggle against Ludogorets?

Were Real's struggles in Bulgaria a result of something Ludogorets did, or did Madrid stand in their own way?

Share All sharing options for: Why did Real Madrid struggle against Ludogorets?

We should have known the match was on its way towards entropic chaos when Ronaldo missed a penalty early on. After the 5-1 demolition of FC Basel two weeks ago it was assumed Madrid would roll Ludogorets in a similar fashion, but Ancelotti's boys struggled against a side it had no business struggling against.

Not only were there very predictable problems (early concession of a goal off a corner that Iker probably could've done better with), but there were some new frustrations also.

With the power of Paint and my deplorable artistic skills, I'll try to break down what happened in Bulgaria yesterday.

Ancelotti wanted to attack Ludogorets down the wings. Marcelo looked his usual self, comfortable going forward but a liability in defense, and to his credit, Arbeloa looked pretty comfortable no matter where he was. I think Arbeloa deserves some praise for transforming himself in his time here, as a few years ago the prospect of Arbeloa going forward was outright terrifying.

A lack of a central midfield 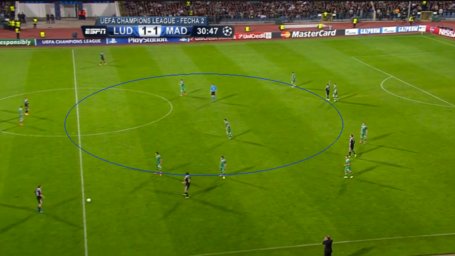 With Kroos absent and Modrić not playing his best, the center of the pitch was desolate. Madrid were trying to build an attack here, but there was no one within what looks like 20 meters of where the referee was standing. Shockingly, nothing came of this possession. 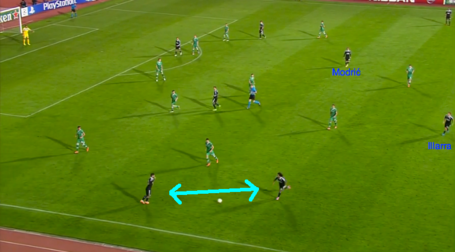 Isco was rated as Man of the Match, and he did really well with his dribbles down the wing. With Marcelo pushing up so often, the two would just hit 1-2 passes in hoping something would open up. Here you'll see Isco and Marcelo doing just that, but there weren't any passing lanes to neither Modrić nor Illarra. I thought Madrid's off-the-ball movement in general yesterday was pretty awful, and this image shows it.

Isco getting no help 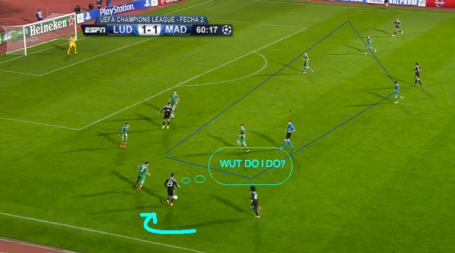 Here's more evidence that not only should Isco be played a bit more centrally, but also how much the squad missed Kroos. I lost count of how many times Isco would dribble, cut inside and see absolutely nothing. Toni Kroos' dominating central presence is indispensable, and without him, there was no help for Isco when he turned inside. Illarra was relegated to practically being a defender, Modrić was on the other side of the pitch, and all of Ronaldo, Chicha and Bale were too far forward.

This strategy really didn't work, and after Isco came off, James had a very similar role. In the buildup to Benzema's goal, James and Marcelo bounced the ball off another a few times, and while Marcelo's cross was quality, it only met Benzema because a Ludogorets defender tripped over his own feet. 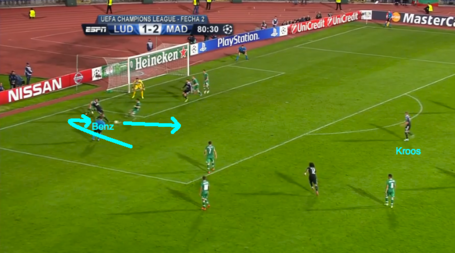 We hear so much about how "Benzema is a perfect striker for Real Madrid" but it was hard to pinpoint what makes that so. I genuinely think there's something to be said when a player plays alongside the same guys, in the same role for years.

Here, Marcelo fed a great through ball to Benzema, and he certainly had an angle to shoot, but he turned and picked out a wide open Toni Kroos who was breaking down (you guessed it) the dead center of the pitch. Kroos' shot went just high, but that's the type of selfless play and awareness that Benzema brings.

Ancelotti probably saw this match as a chance to experiment a bit as he sent out a starting 11 we had never seen before. It didn't help that Ronaldo, Bale and Modrić didn't play their best, but in general this formation doesn't look like it'll work, mostly because of how empty it leaves the middle of the pitch.

Ludogorets Vs Real Madrid, Champions League: All the updates