The Spanish playmaker had a tough time adapting to that position but he did perform brilliantly on the second leg against Atlético de Madrid.

When Ancelotti decided to implement the new 4-3-3 formation with Ángel Di María playing in the center midfield, Isco's options to play relevant minutes suddenly decreased. It's quite obvious that Isco doesn't have Di María's work-rate. Considering that the team was playing without an attacking midfielder behind the striker and that Ancelotti hasn't played Isco on the wings so far, the 2012 Golden Boy winner had to sit on the bench until his coach found a new role for him. Isco is now Real Madrid's second option for the striker position after Karim Benzema.

Carlo Ancelotti explained that Isco's physical attributes required him to wait a little longer in order to gain full condition. In fact, the Italian coach decided to play with that 4-3-3 after the 4-2-3-1 with Isco behind the striker wasn't playing properly.

Isco wasn't adapting well to the false striker position -he struggled a lot during the second leg against Osasuna in the Copa del Rey- but Isco was a very useful asset for Real Madrid during Tuesday's 0-2 win against a shorthanded Atlético de Madrid squad.

Isco is not a born striker like Karim Benzema -who is playing the best football of his career-. But he is more possession-oriented and that could help the team wrap-up games by having the ball. Isco had 75 touches during Tuesday's win against Atlético and he also completed 93% of his passes. Benzema had 44 against Espanyol on Real's 0-1 Copa del Rey win. It's not that Benzema should get more touches. The French is a brilliant playmaker and generates a lot of space for his teammates considering that he plays the striker position, but Isco's ability to find the ball and complete an easy pass might be very useful in certain situations. 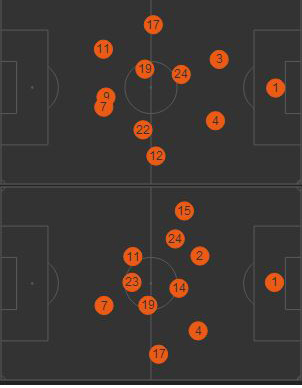 If you take a look at the image on the right you will find the average positions for Real's 0-1 win against Espanyol in the Copa del Rey Quarterfinals and also the ones for Tuesday's 0-2 win against Atlético right below.

Isco understood what Carlo Ancelotti wanted and played as an extra midfielder. That's the perfect definition of a false striker. On the other hand, since Real Madrid simply dominated Espanyol, Karim Benzema played on a much-more pure striker position.

Ancelotti could use this Isco role to help the midfielders against top European teams that rely a lot on the midfield, but it's truet that it would not be smart to take Benzema off the pitch considering his current form. It would be much more better to use Isco as the first replacement to keep the possession of the ball and use him as a way to defend with it.

That way, Real Madrid would add an extra midfielder that helps the team control the tempo of the game. The team lacked this tactical solution under José Mourinho -see the 2-1 win against Bayern Munich in the Champions League Semifinals- and this kind of role could make the difference in any Champions League tie.

Isco might still be a very valuable player off the bench  for Carlo Ancelotti and Real Madrid this year while he grows as a player and learns the center midfielder position this next summer.