Since the beginning of the season, many of us here at Managing Madrid as well as various other Madrid sites have been really looking forward to the arrival of Carlo Ancelotti. If most of you remember the famous Carlos Gaseb and his " source" kept telling us that Carletto would be the new "Mister". There were many of us, myself included, that thought Carlo was coming either way despite whatever this source had to say. Hell I still want to know who the source even is! There have been some heavy eyebrow raising moments (no pun intended) like the sale of a magical German wizard and the decision of keeping on Di Maria on. This really bothered most of us since the beginning of the term was not as pleasant even with the acquisition of the 100 million Euro Welshmen, Gareth Bale. We lost to Atletico Madrid and FC Barcelona and Madrid barely looked the part against a mediocre Juventus in the Champions League (Juve are no longer playing like they were early on but we have to admit, many of us were scared of "La Vecchia Signora").

Fast forward now to a full six months into his first season as Madrid coach, the Milan legend has finally got this team going. A lot of this major improvement is due to the return of "Red Beard" Xabi Alonso and the totally improved Luka Modric. The 4-2-3-1 heavily used by Jose Mourinho is gone as well as the predictable one dimension style of play. Now Madrid plays with the 4-3-3 formation that looks very similar to how Barcelona lines up in. As much as I want to deny it, Madrid has been implementing the "tiki-taka" way of playing but they have tweaked it to allow Madrid to counter as well. I guess you could say Carlo Ancelotti is doing what Jupp Heynckes did to Borussia Dortmund and their Gegen Pressing only I feel he's taking a book out of Pep Guardiola's page of the Barcelona of 2008-09 season.

As all of you know, FC Barcelona's 2008-2009 season was the best in their history as well as the best that any Spanish team has ever had. They won everything there was to play for and for the most part made it look easy. All of this was done with their first year coach, Josep Guardiola. Mind you he was a guy that grew up knowing the Barcelona system due to him being a youth product of La Masia. Guardiola changed the way how Barça played by letting go of some key players like Deco, Belletti, and Thiago Motta to name a few. These guys were key to Barcelona's 2005-06 Champions League winning season. Pep was starting to raise eyebrows and two matches into the new season and already people in Cataluyna were doubting him. Was this 4-3-3 formation with Xavi, Iniesta and Toure Yaya going to work when previously Xavi and Iniesta had been somewhat lackluster during Frank Rijkaard. It all seemed to be going nowhere. Then the unthinkable happened. Barcelona started getting the results and began playing a brand of football that many associated with Madrid. Beautiful football personified. They called it "Tiki Taka" and it was rapidly taking over Spain and the rest of Europe

If you look at this picture here, you can see how Pep had Barcelona lining up during his first season. The formation here is the famous 4-3-3 but the beauty about this is that he was able to get the most out of his players. Dani Alves had been a star at Sevilla but under this new formation, he was able to contribute more and be supported by Messi, Xavi and Toure Yaya. Just like Ancelotti's formation of 4-3-3 of now, once Barcelona would lose the ball, they would quickly switch to a 4-4-2 with Messi and Eto'o being the 2 forwards meanwhile the midfield four of Xavi, Iniesta, Toure and Henry would pressure the opponent by clogging the midfield and pressing the opponent forcing them to make a mistake. Sound familiar? 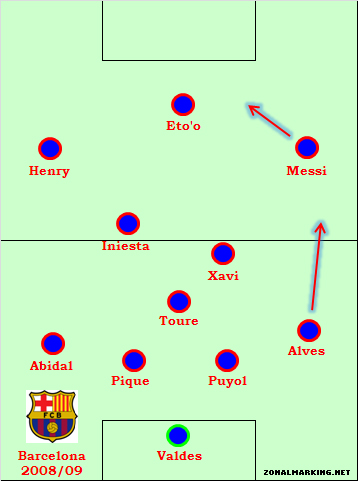 . Now take a look here at this formation for Real Madrid at the start of the season. You could switch out the obvious Isco and put in the ideal XI that Carlo uses today. Just like Pep's Barcelona, they both work to get the best out of our players. For starter's, when Madrid loses possession, this formation quickly changes to the 4-4-2 with Bale acting as the fourth midfielder. Everyone pressures the opponent forcing them to make a mistake which can then be switched into a counter-attacking play of beauty! Players such as Marcelo and Carvajal have the freedom to roam forward to act as another layer of offense with Bale and Cristiano crashing the box waiting for the two fullbacks to spray in the long balls. What this Madrid side has that Barcelona did not have back then is tall players who can score off headers. Yes Messi did win the Champions League for Barcelona off a header but come on, that was some horrible defending from United. 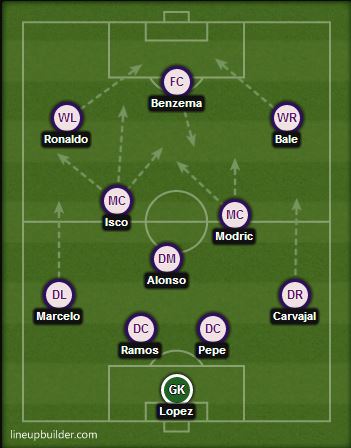 Just so you guys get another point of view of this 4-3-3 formation, I found this video on Youtube of how Carlo's formation works via FIFA 14.

I know many of you still may be either doubtful or not entirely convinced of the 4-3-3 formation under Carlo. But just to argue in his stead, I wanted to present you all with a history of Carlo Ancelotti and the teams he has had in the past and exactly what he has achieved playing that way. 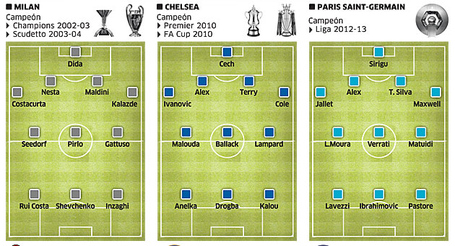 As you can see, not only has the 4-3-3 under Carletto worked for him in all his teams, he's achieved many illustrious titles in Italy, France, England, Europe and quite possibly, Spain. If you look carefully at the midfield three for all three teams, he always places the midfield maestro in the middle, his trickiest midfielder on the right, and the muscle of the three on the left. Obviously that's not how Madrid is lined up now although it was that way in the beginning until a certain someone tore his ACL. Now Madrid lines up similar in the way as to how Pep's Barcelona did. In the place of Toure Yaya, the muscle and commander of the defense, is Alonso. In Xavi's place, the maestro of the attack and master sensei , is Modric. And in the role of Iniesta, the all around midfielder who could get through a tricky spot, is Angel Di Maria. What a beautiful combination that is. We got the best out of a player who many thought was going to leave, the midfielder who many Madridistas called the worst signing of the transfer window and a player who had been struggling for a bit due to his age. Not only does Madrid have several dimensions of attack but now the opponent is confused because not only do they have to worry about a possible counter-attack but with this 4-3-3 Madrid wants the ball to create spaces for the wingers/fullbacks to assist and spray the deadly passes. Couple that with a brilliant idea of the Gegen pressing and you now have an almost unbeatable team.

In retrospect, I am very optimistic about how Carlo's dealt with the team so far. I'm liking the 4-3-3. Mind you I do see some issues that need to be tweaked but this is only the first year. Just like many of you such as Bozz, J A Marsano (Can you just go back to Ireland please?), Pedro, DVDB and Naz talk statistics, hopefully this will help convince you a bit more that this can and will work. I know we still have three months left of the season left, I have faith that this team can and will win titles. Now I'm not going to throw out the treble talk just yet. I'll talk about that once March is done with. For now I'll just leave you all with a couple of fantasy formations that I like using on FIFA and with a quote I stick to when Real Madrid is going through a rough patch like being 5 or more points off the pace.

" If you're going through hell, keep going" - Churchill 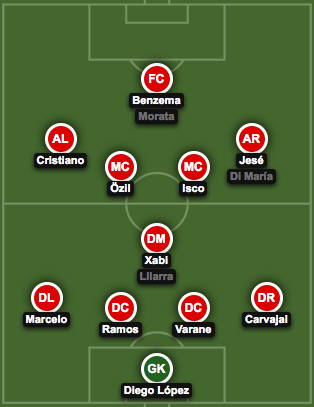 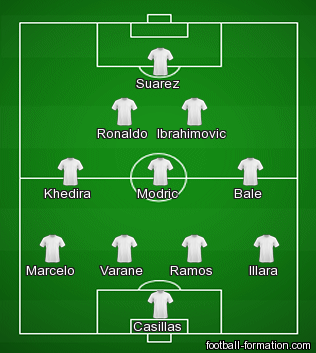