Schalke 04 By The Numbers

They sit fourth in their league but what exactly are their strengths?

Share All sharing options for: Schalke 04 By The Numbers

Comparing the Bundesliga and La Liga is like comparing bratwurst to tapas. It's hard to accurately look at the numbers and come to direct conclusions when you factor in the quality of competition, club philosophies and the rosters of the two teams so I'll just mostly focus on Schalke and how they're doing in their league.

When looking at Schalke in relation to the rest of the Bundesliga, one thing that stands out to me is that there is nothing that Schalke does particularly well. They're just about middle of the pack to slightly above average in nearly every basic statistical category, both on offense and defense. They're sixth in the league in possession (50.3 percent), fifth in pass success (80 percent), 12th in aerial duels won per game (28), eighth in shots on target per game (4.9) and twelfth in shots conceded per game (13.2). They also don't cross much and they don't play long balls or through balls often.

Basically, they keep their passes short (404 on the season, fourth in the league) and look to attack down the right side (39 percent of their attacks come down the right) in order to get the ball in the middle to get the ball in the six yard box where nine percent of their shots come from, second most in the league. Only three other teams in the league spend more time in the opposition half (29 percent of matches) than Schalke and two of them are Bayern and Dortmund. Schalke fans can thank the attack of Julian Draxler, Max Meyer, Jefferson Farfan and Kevin-Prince Boateng for this. 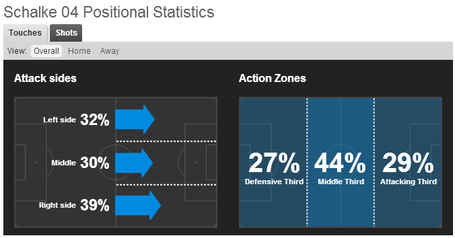 Speaking of these four, they're the only way I could see Schalke creating any sort of problems for Madrid. Since Schalke's defense isn't that amazing (seventh in the league in goals conceded at 30) and seventh in shots conceded per game (13.2), they'll be relying on these four to give them any chance at scoring on Pepe and co. The guy putting up the big numbers for Schalke this season is Farfan. His eight goals, five assists and 2.4 key passes per game land him in the top-15 in all three categories in the Bundesliga. Meanwhile, teammates Draxler and Meyer are two of the league's best and most dangerous dribblers with Draxler receiving the (premature) label of the German Cristiano Ronaldo thanks to his incredible footwork. While he's been dealing with injuries this season, one can't ignore what he does with the ball. Pulling a quote from a StatsBomb article from a month or so ago:

The other thing that Draxler does absurdly well, both in the center and when out wide, is dribble. His current rate of 5.44 per 90 is better than anyone posted in Europe last season, and assuming my data is correct, he's never been worse than 62% successful in his three seasons of heavy rotation. For reference, Ribery succeeded at a 51% rate last season, Messi 65%, and Suarez 37%.

Kid is unreal and will be a huge target for Arsenal, and allegedly Bayern, this summer.

Defensively there just isn't too much to talk about. They're good at intercepting the ball (15.9 per game, third in the league) but with possibly two starters on the back line being out against Madrid I fully expect the BBC and Jese to run rampant. They're sixth in the league in fouls per game (16.3) but are pretty smart about it as they only have 25 cardings to their name due to fouls so expect some potentially physical play if they fall behind.

So there you are, a quick statistical look at Schalke. Is there anything that worries, or stands out, to you?