Our first game in the UEFA Champions League Round of 16 was arguably our best match so far. In this piece we try to explain how Ancelotti's men displayed such an extraordinary performance.

As our beloved community manager put it, Real Madrid's game in Gelsenkirchen was a perfect storm. I believe that not even the most optimistic madridista could imagine that we would obtain such an impressive advantage over Schalke 04.

It would not be fair, however, to say we made no mistakes. In fact, in the first few minutes we struggled a bit against Schalke's offensive attempts by their right wing. Farfán and Höwedes were really aggresive attacking Marcelo's exposed back, and, although they did not succeeed in scoring, most of the German's options came through there, including the cross that ended with Draxler shooting inside the box and being brilliantly cleared by Casillas. 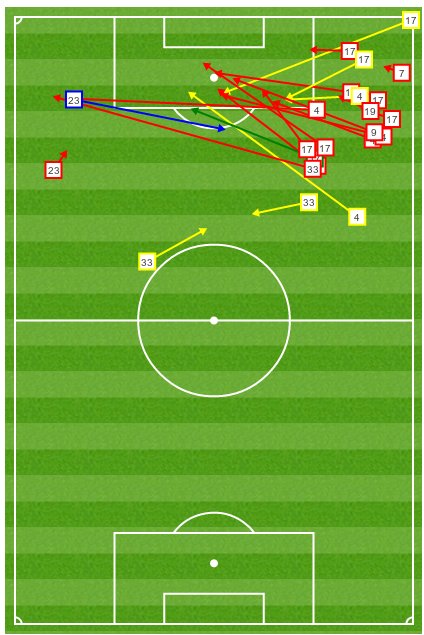 This was the biggest, and possibly unique, weakness displayed by Carletto's men yesterday, as the average positions diagram may suggest (see how Farfán appears behind Marcelo's back). However, after the twentieth minute, there was no true danger there, since Ramos and Di María increased their intensity to cover the Brazilian and let him freely incorporate to Real Madrid's offensive positions. As usual, Ancelotti used a very symmetric 4-3-3 with a very advanced defensive line that Schalke was never able to beat with a 4-2-3-1 that looked, mostly, like a 4-6-0, given the little space they could use. 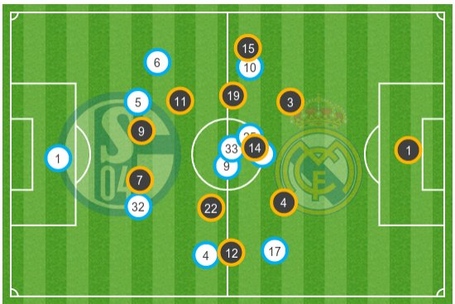 As we were pointing in our preview, Schalke's softest spot was their defense, and the previous diagram also shows that Ancelotti was really aware of that fact. Höwedes, who is a centerback acting as a right fullback, tried to help in pressure and offensive phases but his lack of speed disabled him to return to help Matip and Santana. This, together with Boateng's attacking nature, who looked anything but a box-to-box yesterday, resulted in a lot of free space in our left flank. Di María, Ronaldo and even Marcelo could easily attack Höwedes back, inviting Matip to leave his position to stop them. The superiority was created and it was, then, easy for Benzema and Bale to face Santana and Kolasinac and create a goal ocassion.

However, waiting for Höwedes to come up was not the only weapon Real Madrid had, and it would not have been wise to trust only on it, given that the ball possession was clearly madridista. Carletto's balance came into scene once again. This team's ability to avoid losing the ball in bad positions is tremendous, as the 353/375 passes in the middle third can testify, for a total 551/611 throughout the whole field. 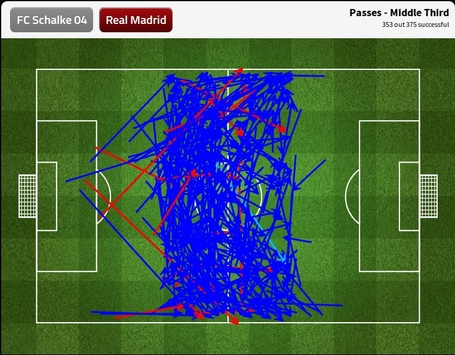 Finally, we have to mention our strikers' outstanding performance. The six goals scored by the BBC trio are the ultimate reason for our victory and the ones that give meaning to all the job done by the rest of their partners, but the result could even have been higher if we take into account that Ronaldo only scored twice out of ten attempts. Benzema's game was perfect, proving once again why he is the best possible centre-forward for Real Madrid. Moving all along the attacking line, he was the perfect fellow for Bale and Cristiano: a moving reference that was never understood by Schalke's defenders, an excellent playmaker that excelled with 33/33 passes and a finalizer that contributed the final result with a key recovery, two assists and two goals. 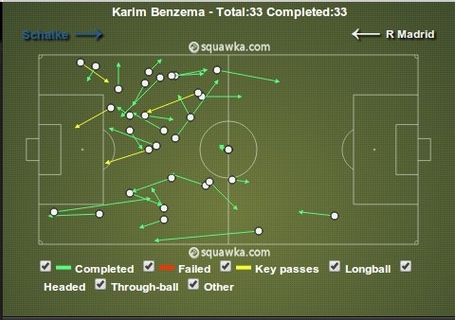 All things said, I believe our coach is totally satisfied with the performance of his men against Schalke, since their global behavior was hardly improvable. However, hard work will be needed in a crucial match that will be, for sure, very different from this, against Atlético de Madrid on Sunday.