A look ahead to the remainder of the month

Yeah, yesterday wasn't what we hoped for but it could've been much worse.

Share All sharing options for: A look ahead to the remainder of the month

How 's everyone doing? You guys alright? Still a bit salty from that draw yesterday? If you're still upset, here's a picture of my cat to hopefully cheer you up and make you feel all warm and fuzzy inside. 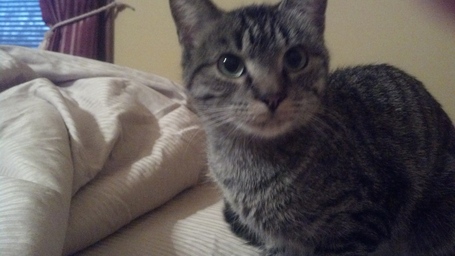 Isn't she a cutie pie? I tried to name her Isco Disco but my girlfriend wasn't having it. She also didn't like me trying to name her Irina Shayk (for whatever reason) so I settled for Maya. Maya is unpredictable, she's hot tempered and prone to having crazy mood swings but I still love her.

The reason I bring her up (other than to maybe make you say "aww" and to make a horrible analogy) is to show just how similar she is to our favorite club. Just like RM, she's has crazy mood swings and this was evidenced in yesterday's match where Madrid played like absolute garbage for the first 44 minutes or so and looked like world beaters coming out of halftime. Maya, just like Madrid, is hot tempered and this was clear in Cristiano Ronaldo's sending off which may hurt the team for the next few games. Bad call or not, CR cannot, and I can't stress that enough, take a swing at the opposition when he's the best player in the world and his team needs him to break a tie game in a crucial match on the road. But, just like Maya's naughty self, we'll come back and cheer for this team once the anger subsides. That's just how sports work and we eventually move on to the next match.

So moving on, where does that leave our club, and the other title threats, for the rest of the month?

So there you are. Based on strength of schedule, Barcelona appears to have the toughest task what with having to deal with Sociedad twice, a solid Sevilla once and a rampaging Manchester City side. Real Madrid seem to have the second toughest schedule with a Villarreal match at home and two legs of Atletico to deal with, while Atleti has the easiest month (relatively speaking) out of all the sides with Real by far being their biggest test this month. Atleti leads both Real and Barca by three points in the standings and Barca has the win and goal differential edge over Real Madrid.

Yesterday sucked, the first half was the worst in a long time (Benz, Xabi and Modric were oddly poor in particular in the first 45) and the second was filled with questionable decisions from the players, Carlo and especially the refs. However, it's not all gloom and doom as this club has fought back to be just one victory away from the top spot with its rivals also facing a difficult month. While not many are happy with the game yesterday, however; try to look big picture and keep it in perspective as a draw in an environment as the new San Mames is nothing to be ashamed of (and give some credit to Ibai Gomez for that ridiculously fantastic bullet of a goal).

This team was never going to bulldoze through the league with a new manager and so many new players/injured players so results like yesterday will happen as the guys aren't invincible machines. While you'd expect a better showing than what we saw yesterday (more energy, better possession, less head-scratching substitutions), the fact that they turned things around after that disastrous first half should give you hope that yesterday can be used as yet another stepping stone in a very long season. Just think, had Ibai's shot gone just six inches to the left we'd probably be sitting here today and talking about how Madrid had the grit and guts to pull out three points on a tough road game. This is truly a game of inches.

On to the next one.