Atleti's Gabi is one of their unheralded pillars this season.

Atletico Madrid is a good team. Atletico Madrid is a damn good team. Diego Costa is their obvious star with 20 goals in the league already to his name in addition to the title of "Biggest Scumbag" hovering over his head as well. Thibaut Courtois is arguably the best young keeper in the world and Koke is just doing wonderful things in the middle of the field while waiting for an oil-funded club to come calling this summer. Those are the obvious stars, however; I feel that Gabi will be the key player to watch in both legs against Real Madrid.

Gabi isn't the flashiest of players. He's not the well-known midfield name like Koke and Turan and isn't the guy who will make the big splash play that you can single out as the key point in a match. However, he's consistent and does a little bit of everything to help his team win. Basic numbers show that he has a goal and five assists in the league. Not bad, nothing spectacular. However, he creates the second most key passes for his team (1.4/game), soaks up the third most fouls (1.3/game), is second in tackles (4.2/game) and is third in interceptions (2.5/game). He's strong in tackling and blocking off the ball from the opposition while being fairly good at spraying out long balls. Where he's susceptible is being beaten off the dribble and being beaten in the air. 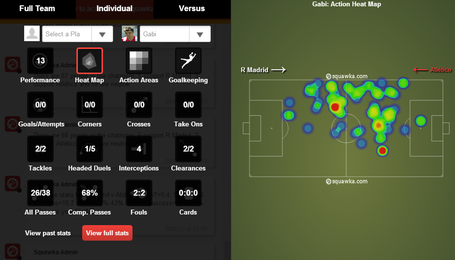 As you can see, he didn't have the most mind-blowing amazing day against Real Madrid in the first meeting this season but he had an area of the pitch to cover and he made it his own. Along with Tiago and behind the Koke/Turan combo, he congested the middle of the pitch and made it incredibly difficult for Cristiano Ronaldo to cut inside thus leading to a number of side-to-side passes with few incisive through balls to be found. That's Atleti's gameplan in a nutshell: congest the middle of the pitch, defend hard as a unit and hit the opposition on the counter. Gabi and Tiago are two of the lynchpins of this plan. This is why I find wing play to be vital as Real's best success that game came through crosses into the box and not trying to pass through the middle of the box. With Turan and Luis potentially being out for the match while Real have a host of incredibly pacy wingers to choose from, this game might be won out wide instead of through the middle where Gabi awaits.

A number of factors will determine these two legs. Atleti's pressing and counter, Real's effectiveness in front of the goal, keeper play between a legend and a potential one in the making. However, Atleti is a team with a number of guys doing the dirty work in order for a few to shine bright and Gabi is a textbook example of a dirty work guy. Should Isco, a player who can beat a defender off the dribble and irritate them (Gabi already has seven yellow cards to his name) start, breaking down the center will lead to smoother transitions out wide and will provide crosses into the middle where attackers will (hopefully) have a higher percentage shot at Courtois and as we all know from last year's CDR final, getting past him is a tall task indeed.

(Note: I am not a tactician by nature and I haven't watched every Atleti game with a hawk's eye. If you have more input on Gabi and Atleti please feel free to share it in the comments section.)