Real Madrid takes to the road to meet a struggling Malaga side.

Choo-choo, all aboard the Trap Game Express! The best definition of the trap game I've found is this:

Now, whether or not you believe in such a thing is up to you but in my eyes this game is 100 percent the definition of a trap game, here's why. It's on the road, Madrid is coming off a near perfect win against Osasuna, their thoughts will undoubtedly be on Barca in the week ahead, Barca struggled in the league last week and Madrid might feel just a tinge of complacency against a Malaga side sitting 11th in the league but with a roster that has a decent amount of talent and Malaga has a player able to single-handedly keep them in the game long enough to get a fluke goal.

Case in point: Willy freaking Caballero. I love this guy, he's not Argentina's #1 keeper but he almost always gives Real Madrid a hard time in between the pipes. You may remember the first meeting between the two sides that ended 2-0 in Madrid's favor. Don't let the score fool you, even though Madrid was in control throughout it took a late CR penalty to secure it after Caballero made a ridiculous 13 saves to keep his team in it. The guy deserves to be starting for a better club than Malaga. Fear the Caballero.

Other than Slick Willy, Malaga isn't all that special, sitting only three points off of relegation due to a loss of key players and investment from the club. They're not great at keeping the ball and they like to play out wide. They either shoot way out from distance or right in the six yard box, not too much in between. They're not particularly good with the ball or in their shot selection but they are aggressive and not afraid to get physical. They've scored 26 goals in the league while conceding 35 so it's safe to say that Diego Lopez should (knock on wood) have a relatively quest day in goal. Roque Santa Cruz is always capable of being a pain just as he was last season when he scored two against Madrid, but he's not having a particularly great season right now. Malaga does have two wins, two draws and two losses in their last six while Madrid is unbeaten in its last 17 league games and 29 overall.

As ADM is sitting on the edge of a card accumulation suspension and with El Clasico looming next week, I'd say it's safe to assume that Isco will get the starting nod. Sergio Ramos will be out due to suspension so a fresh Pepe and Rafa Varane will partner up in the back. Other than that everything else should look the same with maybe a small chance of seeing Coentrao start but I wouldn't count on it.

Prediction: 2-0 in favor of Real Madrid. Malaga will look to pick up only its second win against Real Madrid since 1999 and Willy could keep them in it but I think Madrid's attack should be enough to break through. Barca will host Osasuna and Atletico will host Espanyol.

On a fun side note, Malaga's marketing team released a poster yesterday taking a jab at Isco's move to the capitol. 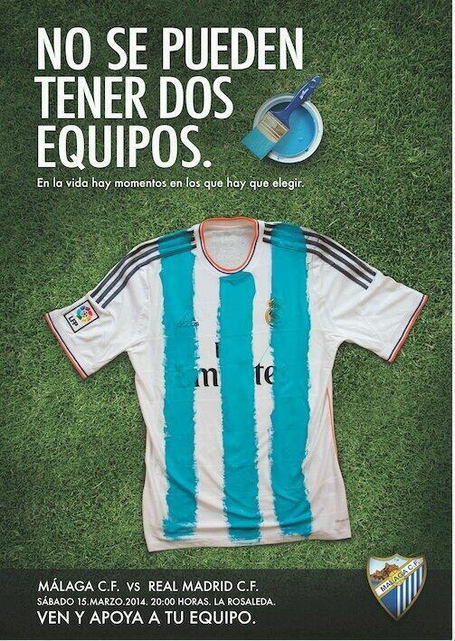 My rough translation (Spanish minor in college coming in real handy here): "You cannot have two teams. In life there are times when you have to choose." Real Madrid's fanbase responded in turn almost immediately. 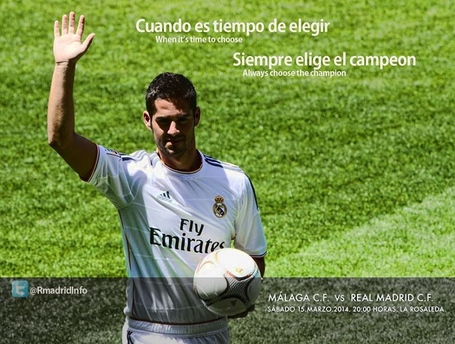 Great stuff and harmless fun from both clubs. Isco made the right choice and I, for one, am glad to have him.