At this point in the season, I feel confident in who my preferred players are for the future.

Looking at Carlo's lineup decisions lately, there seems to be a stability which I, personally, find incredibly reassuring. I like when players are set in their roles and minutes and aside from the Bale v. Jese problem (which is the best kind of problem to have), there haven't been too many lineup fluctuations since poor Sami's injury which have left me questioning the great Eyebrow.

Except one, and that's the selection of fullbacks.

As I've mentioned before, the way to beat Atleti is with creativity and out wide rather than clogging up the middle and trying to have a rumble with their heavyweights. I love me some Luka and Xabi but I'd rather see them as peripheral characters in a game like yesterday with the focus being out wide. That being said, the selection of Fabio and Arby left me a tad bit disappointed when I saw the pre-game lineups. I trust Carlo since he knows this squad better than we possibly can, and fans should really acknowledge that, but when you consider how little Carvajal and Marcelo had to do in the Schalke game after Madrid went up 2-0 you'd think that having a over three days would be enough rest for them to feature in yesterday's game. If the starters yesterday were at 100 percent like he claimed then what were Marcelo and Carva at, 90?

I think it goes without saying, and it's generally accepted, that Marcelo and Carva are better offensive threats going forward than Fabio and Arby, respectively. You can use pass success, key passes, whatever you want, it checks out. Toss in Marcelo and Carva's natural comfort with attack and it makes the choice easy. Now, those who will argue against this will bring up the topic of defense, which is the first job of a fullback. Defensive metrics are a murky and underdeveloped area so I won't lean on them, but even if you look at some of them you'll see that there's no discernible dropoff from Fabio to Marcelo and Arby to Carva.

Here is the heat map for Arbeloa and Coentrao (with Real Madrid going forward from left to right). 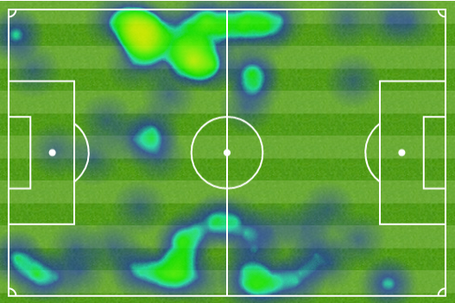 Now here's the heat map for Marcelo and Carvajal (with Real Madrid going forward from left to right). 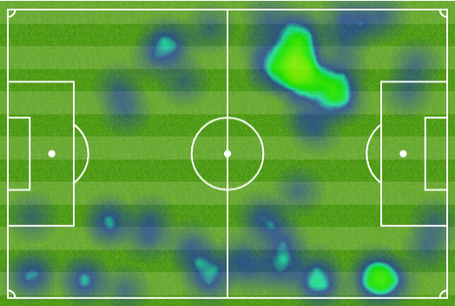 Big difference. So essentially the point I'm trying to make is that Marcelo and Carva's defensive deficiencies are completely made up for by their offensive contribution and the defense that Fabio and Arby provide doesn't make up for their lack of offense. Are Marcelo and Carva perfect? Heck no! But even if one phase of their game is struggling I still feel that they can contribute in other ways.

I like Fabio and want to see him succeed, despite his feelings toward the fanbase, and I like Arby due to his hard work and dedication. I also get that Carletto wanted to go with the veteran presence in Arby and that Fabio needs some minutes considering how much time he's missed, but he should be thankful that the game ended in a draw as those two guys were put to the test and, in my opinion, were far outplayed by their eventual substitutes. Start one, that's fine, but starting both just cripples the offense from the back and Bale could've used a guy like Carva in a tough and congested road game like what we saw yesterday. They can have a tough day on offense but when the other two guys on the defensive line are struggling what else can Fabio and Arby bring to the table?

Unfortunately, I don't think it's much.