Now that this round of international matches is over and done with, we take a look at the top three Liga clubs' remaining schedules.

Share All sharing options for: Previewing the Remaining Schedule

One week ago we, Real Madrid fans, were sitting pretty and basking in our own glory. Our favorite team dismantled Schalke 04 to the tune of 6-1 and was looking ahead to their upcoming Liga match against Atleti and setting them six points back, an Atleti team which had just lost to RM by  5-0 aggregate in the CDR. Then the actual game happened and Real Madrid were lucky to pull out a point (and in my opinion yes, they were lucky and were outplayed for the majority of the match). Meanwhile, Barca won their league match 4-1 and closed Madrid's league gap to one point. Now the clubs are all separated by three points with 12 games apiece left on their schedules. Here's how it breaks down. 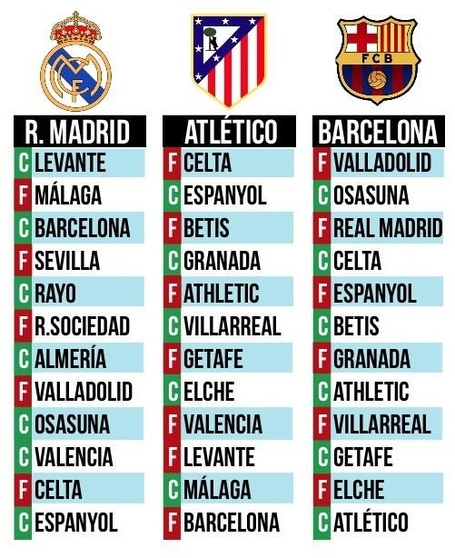 Fun! Now let's break it down by each club.

The combined record of the teams on Real's schedule is 112-75-127 and RM is 10-1-1 against them so far this league season. Now this will obviously change and isn't the best indicator of competition but it's interesting to note. What's nice is that seven of those are at home including three out of the last four. Now, Sevilla and Sociedad away won't be easy fixtures and one also has to consider CDR and CL obligations, but it sets up nicely for RM to get on a roll at the end while the other two contenders have big tests. The Clasico will obviously have the biggest impact in determining the title winner.

The combined record of the teams on Atleti's schedule is 115-70-127 and Atleti is 9-2-1 against them so far this league season. Wowza, pretty close to their Madrid neighbors. However, I find this schedule to be noticeably more difficult and here's why. First, they only have five home games in that den of sleaziness they call the Vicente Calderon Stadium. Secondly, back-to-back games against Athletic and Villarreal, an Athletic club which is 10-3-1 at home? Have fun with that, Atleti. Third, the game which could decide the season is the finale at Barcelona. While this isn't an automatic loss for Atleti it will be a brutal assignment. With a club that isn't deep at all past their starting 11, this schedule in addition to the Champions League schedule (and yes, I think they'll beat Milan) will stretch this club thin.

The combined record of the teams on Barca's schedule is 121-69-122 and Barca is 9-2-1 against them so far this league season. Basically the same level of success and failure but again, noticeably different from Real Madrid's schedule. Barca's schedule is split evenly between home and away games but three out of their last five games are very tough. Athletic at home, away at Villarreal where the Yellow Submarine will surely be bolstered by a very rowdy crowd. In addition, they still have to play the second part of the Derbi Barceloni against Espanyol which is an away game and a game which probably means more to Espanyol at this point. Then there's the season finale which could be a make-or-break game.

My prediction (for whatever it's worth)

This is obviously for kicks and giggles and I wouldn't bet your wife on my prediction, but I think I have a pretty reasonable educated guess at how the season will turn out. Please feel free to give your predictions below and your reasoning for it, I won't be hurt if you disagree.

First, Real will drop points and I think it will be four points. I think they'll draw away at Sociedad and I think the Clasico will be a draw. This will put them at 96 points at the end of the season and first in the league.

I think Barcelona will drop six points. I think they will draw in the Clasico, draw at Villarreal and draw the finale against Atleti. This will put them at 93 points and second in the league at the end of the season.

I actually think Atleti's fighting spirit (barf again) will keep them from losing again but I do think they'll also drop six points in the back-to-back against Athletic and Villareal as well as drawing against Barca in the finale. This will leave them at 91 points and third in the league at the end of the season. However, I have a sneaky feeling that Atleti will have a very good shot at winning the finale against Barca and I wouldn't be shocked to see them jump up to second.

So there it is, a quick glance at the schedule. What are your thoughts, agreements, disagreements, etc.?